Small business dreams: A look at the most searched, common and profitable small businesses 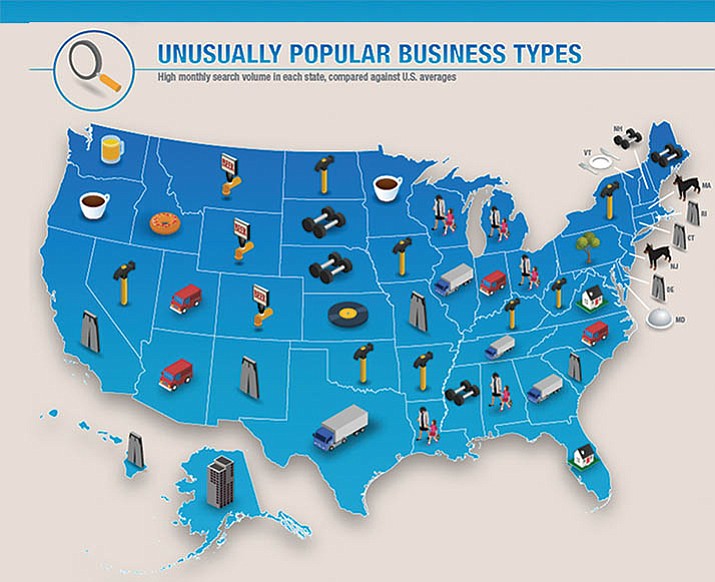 The most successful small business owners are those who do their homework before pouring their life savings into a dream that may or may not pay off, said Stephen Hart, spokesman for the Small Business Administration in Arizona.

For many people, this begins with typing a few words into an online search engine such as Google.

In a recent study, Bid-On-Equipment analyzed national Google search trends to determine the types of businesses Americans are most interested in starting.

Specifically, they looked at the average monthly search volume in the U.S. for keywords, including variations of either “business plan for an x” or “how to start an x.”

Coming in at No. 1 was clothing line. After that was restaurant, followed by food truck and then record label.

While these are the types of businesses many people dream of starting, they are certainly not the most profitable, nor the easiest to keep alive. This is common knowledge by now, but people don’t let that stop them, Hart said.

“It’s people’s genuine held belief that they make the best damn sauce or spaghetti and meatballs, and if people only tasted it, then they’d get rich,” he said. “It’s that passion and that belief that allows them to risk their savings and their retirements and take a shot in business, and we hate to see that.”

Granted, passion counts for something, but Hart encourages potential business owners to set realistic goals and use market analysis and calculated budgeting to reach them.

“It’s about going through the proper business plan,” he said.

Someone locally who is familiar with all of this and has found considerable success in several different types of small businesses is Ty Fitzmorris, owner of Raven Café, Raven Sound Studio, Peregrine Book Company and Grey Dog Guitars.

Through careful analysis of the local business community over the years, he’s noticed that many people simply approach entrepreneurship incorrectly.

“It’s about focusing on who’s doing what and what does that leave unaddressed in our market,” Fitzmorris said. “I think we can do that a little better in Prescott. I’ve seen so many people open businesses that are really close to other businesses and end up going under, which is the most heartbreaking thing.”

At the same time, he’s found from first-hand experience that getting locals to break their routines to support a new business of any kind is almost always a long-term effort.

“I do think that Prescott has a bit longer of a lag in capturing market share,” he said. “So you might open a really great business that’s well conceptualized, well executed, and you may find that you got a certain amount of interest, but not that much revenue. This has been the case for all of my businesses. Like if I were to take our year one revenue as indication of long-term revenue, it would be totally inaccurate. Over time, revenue continues to grow. In a small town, it takes a long time for word to get out and for people to really make it into your establishment.”

On average, most small business startups throughout the country can make it at least a few years, according to Bureau of Labor Statistics. However, around half of all businesses no longer exist after five years, and only one-third make it past their 10th anniversary.

The good news is once a business weathers those first several years, survival rates begin to flatten out. To better one’s chances of making this happen locally, it is key to have sufficient financing to account for a slow start and to make the business feel personable.

“The name of the game is about really building trust in the community,” Fitzmorris said.