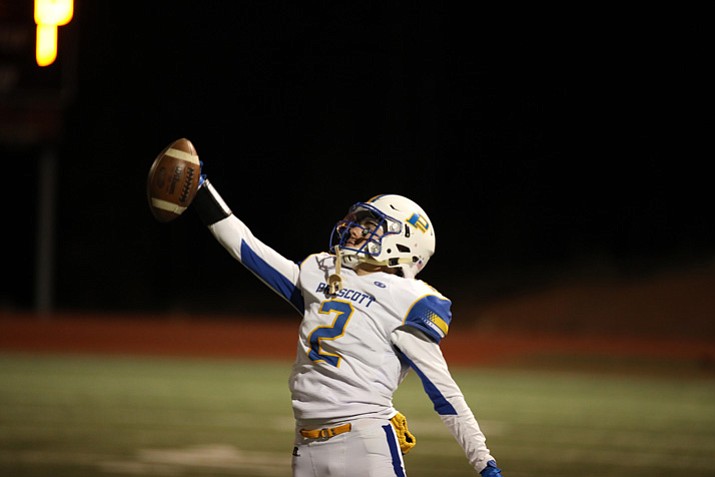 Prescott cornerback John Chaffeur reaches out for an interception, which he returned for a touchdown in the first quarter against Coconino on Friday, Oct. 13, in Flagstaff. (Jim Clark/Courtesy)

It is the third win in the past four weeks for the No. 19-ranked Badgers, which quickly recovered after suffering a 38-6 blowout loss against rival Mingus a week ago.

“When you play as bad as we played last week, [the next week is] always a test of your character,” Prescott head coach Michael Gilpin said in a phone interview Friday night. “We came out smoking and I was proud of the guys for putting last week behind them.”

Gilpin added the last few weeks have revealed the “weird swings” that can happen in football.

“We take on a decent Mingus team and don’t show up. Then do this tonight. … These weird swings of maturity. Ultimately it’s a good crew and I’m proud,” Gilpin said.

Clark opened the game with a 51-yard touchdown pass to Chaffeur at the 8:48 mark in the first quarter.

On Prescott’s the next possession, Sam Giordan scored on a 1-yard TD run, then Chaffeur picked off Coconino quarterback Ty Furr and ran it back for a touchdown to put the Badgers up 21-0 and they never looked back.

In the second half, Ryan Greene made it 28-7 on a 4-yard TD run, his first and only score of the night after having two of his touchdowns called back on penalties earlier in the game.

Prescott returns home to play its final two regular season games in front of the Badger faithful, the first coming against No. 12-ranked Flagstaff on Friday, Oct. 20.