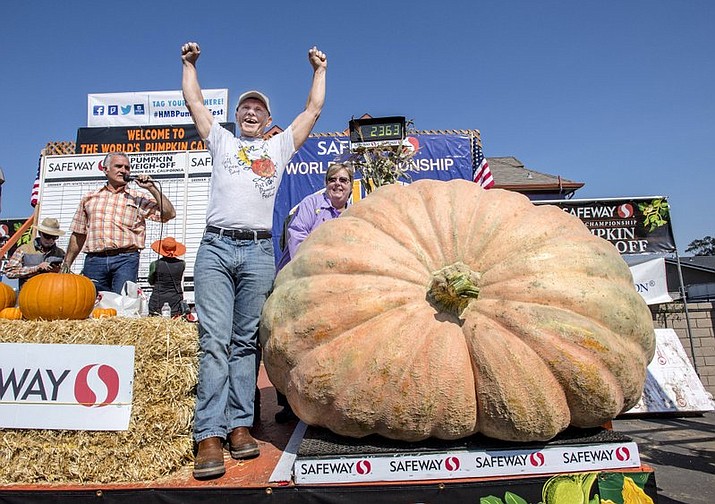 Cindy Tobek of Olympia, Wash., waves to the crowd as she stands on her 2002 pound pumpkin at the 44th World Championship Pumpkin Weigh-Off. (Mark Rightmire/The Orange County Register via AP)

HALF MOON BAY, Calif. (AP) — The winner of the 44th World Championship Pumpkin Weigh-Off had the heaviest pumpkin recorded in the history of the San Francisco Bay Area competition.

The Orange County Register reports that a forklift hoisted the giant pumpkin onto a scale and a crowd watched as it was weighed Monday in downtown Half Moon Bay, south of San Francisco. It registered 2,363 pounds (1,070 kilograms) to make it the seventh win for grower Joel Holland.

The giant pumpkin earned the Sumner, Washington, man prize money of $7 per pound.

Cindy Tobeck won the competition last year with a pumpkin weighing 1,910 pounds. Tobeck rode on top of her entry this year as it was brought to the scale, but its 2,002 pounds fell short of Holland’s entry.