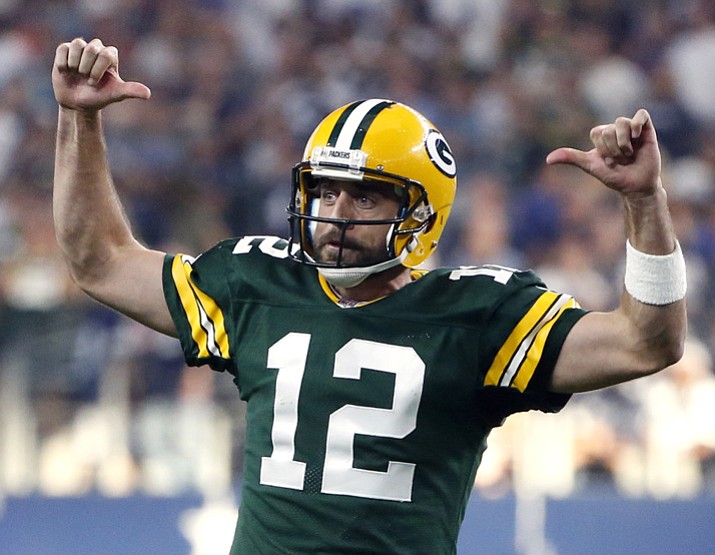 Green Bay Packers' Aaron Rodgers (12) celebrates a touchdown in the final seconds of the second half of an NFL football game against the Dallas Cowboys on Sunday, Oct. 8, 2017, in Arlington, Texas. (Michael Ainsworth/AP)

ARLINGTON, Texas — Aaron Rodgers threw a 12-yard touchdown pass to Davante Adams with 11 seconds remaining, lifting Green Bay over the Dallas Cowboys 35-31 on Sunday in another thriller nine months after the Packers’ divisional playoff victory on the same field.

Rodgers capped a 75-yard drive in just 1:02, going toward the same end zone as in the playoff game.

Adams, active 10 days after leaving the field on a stretcher on a helmet-to-helmet hit that resulted in a suspension for Chicago linebacker Danny Trevathan, had seven catches for 66 yards and two touchdowns.

Dak Prescott had given Cowboys the lead on an 11-yard touchdown run with 1:13 remaining to cap a 17-play drive that lasted almost nine minutes. Dallas (2-3) has already matched the number of losses from the magical rookie season for Prescott and running back Ezekiel Elliott.

The Packers (4-1) had gone ahead earlier on Damarius Randall’s 21-yard interception return for a touchdown, the third of five lead changes in the fourth quarter. Green Bay rallied from 15 points down in the first half.

Aaron Jones had 19 carries for 125 yards and a TD, becoming the first Green Bay running back with 100 yards in his first start as a rookie since Samkon Gado in 2005.

Elliott finished with 116 yards on 29 carries. Prescott was 25 of 36 for 251 yards and three first-half touchdowns, two to Cole Beasley and one to Dez Bryant.

Rodgers was 19 of 29 for 221 yards and three touchdowns and set up the winning score with an 18-yard scramble.

Jimmy Graham scored late in the first half in a defense-dominated win for the Seahawks (3-2), who shut out the NFL’s highest-scoring offense in the second half of their second straight win over their NFC West rivals.

Thomas made enormous defensive plays early and late for Seattle. The veteran safety stripped the ball from Todd Gurley at the goal line to kill the Rams’ opening drive, and he intercepted Jared Goff’s fluttering pass at midfield with 6:02 to play.

Sheldon Richardson also came through with two big plays, diving to intercept a deflected pass in the third quarter before scooping up Goff’s fumble near midfield with 2:45 left.

Goff moved the Rams 55 yards in the final 1:09, but Seattle’s defense made its final stop. Rams rookie Cooper Kupp barely missed a diving TD grab on third down, and Goff’s fourth-down pass to Kupp was too low.

INDIANAPOLIS (AP) — After blowing a 14-point lead in the final eight minutes or regulation and surviving an interception in scoring position in overtime, Marlon Mack’s 35-yard run set up Adam Vinatieri for a 51-yard field goal as the Indianapolis Colts beat the San Francisco 49ers.

Deshaun Watson’s 48-yard touchdown pass got the Texans within six early in the fourth quarter before Smith extended the lead for Kansas City (5-0) to 32-20 on a 10-yard pass to De’Anthony Thomas with about 9 minutes left. Tyreek Hill padded the lead when he returned a punt 82 yards for a touchdown.

EAST RUTHERFORD, N.J. (AP) — Philip Rivers threw a 10-yard touchdown pass to Melvin Gordon with 2:58 to play and the Chargers rallied to beat the Giants in a game worthy of two teams that started the season 0-4.

DETROIT (AP) — Cam Newton showed he was very focused on football, throwing three touchdowns to help the Panthers build a lead big enough to hold off the Lions.

CINCINNATI (AP) — A.J. Green had a hand in three turnovers that kept it close, but the receiver also pulled off a 77-yard touchdown and another long catch that set up a score.

CLEVELAND (AP) — Josh McCown came back to Cleveland and beat the team that cut him, throwing two touchdown passes and leading the surprising Jets over the winless Browns, who benched rookie quarterback DeShone Kizer and fell to 1-20 under coach Hue Jackson.