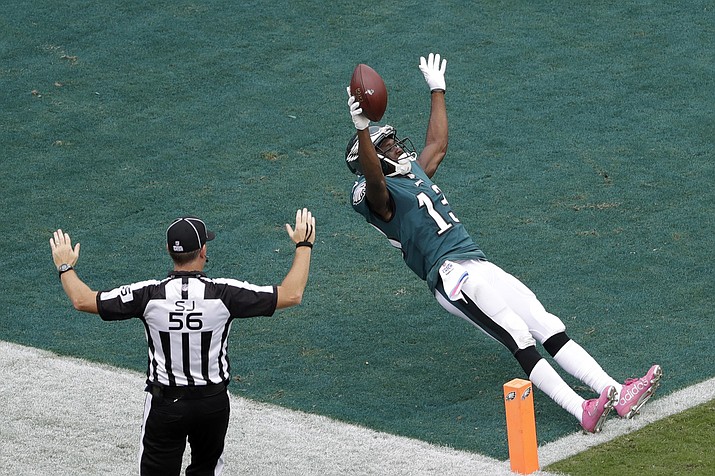 Philadelphia’s Nelson Agholor celebrates as he crosses the goal line to score a touchdown during the second half of an NFL game against the Cardinals, Sunday, Oct. 8, in Philadelphia. (Michael Perez/AP)

The quarterbacks and teams seem headed in opposite directions. Wentz has the Eagles off to an impressive 4-1 start in his second season. Meanwhile, the window could be closing for the 37-year-old Palmer and the Cardinals (2-3).

“The sky’s the limit,” Eagles coach Doug Pederson said. “And the key is just staying grounded and staying focused on the next game. These wins, these losses, are short-lived in this business and you have to get yourself ready to go within 24 hours.”

While Philadelphia quickly prepares for a trip to Carolina (4-1) on Thursday night, the Cardinals return home to face Tampa Bay (2-2) looking to avoid a downward spiral.

“We have to find out what went so wrong and find ways to improve,” Palmer said. “We have a veteran group with guys that are professionals and we have to pick it up. There’s no doubt we have to do better on offense.”

Wentz tossed three scoring passes on three consecutive attempts in the first quarter, including 59 yards to Torrey Smith, 11 yards to Zach Ertz and 15 yards to Trey Burton. He connected with Nelson Agholor for a 72-yard TD on third-and-19 in the third quarter. Wentz is the first Eagles player to throw for three touchdowns in the first quarter of a game.

Here are some things we learned following Philadelphia’s convincing win over the Cardinals:

The Eagles entered with the NFL’s second-best third-down offense and went 9 for 14 in those situations. Wentz was 11 for 12 for 225 yards and three TDs on third down. Wentz already has six TDs on third downs in five games. He had three such TDs his entire rookie season. “Third down is the money down,” Wentz said. “To be that efficient, that’s huge.”

Cardinals coach Bruce Arians said the flat performance was his fault. “I got to point it at me because our team obviously was not ready to play in all three phases,” he said.

His players disagreed. “I don’t think that anyone thinks it’s a whole better if we are blaming anybody,” right tackle Jared Veldheer said. “It just comes down to us fixing problems, addressing them head-on. You have to be vigilant when watching the tape to get better and correct mistakes.”

LeGarrette Blount had 74 yards rushing on 14 carries for the Eagles, a week after he ran for 136 yards. Blount’s 37-yard run was another tough, bruising play that energized the offense and the crowd. “They’re good at stopping the run, they’re good at everything,” Blount said. “We studied those guys hard and went out and played hard.”

Smith and a few teammates came up with an original, baseball-themed TD celebration . Smith was the batter. Jeffery crouched like a catcher. Agholor pretended to be the pitcher and Wentz was the umpire. Agholor wound up and threw a fake pitch. Smith used the ball as a bat and swatted a “home run.”

Cardinals LS Aaron Brewer (arm) left in the first quarter. Veldheer (knee) and DT Olsen Pierre (ankle) were injured in the third. Eagles RT Lane Johnson left at halftime with a head injury, but Pederson couldn’t confirm if he has a concussion.