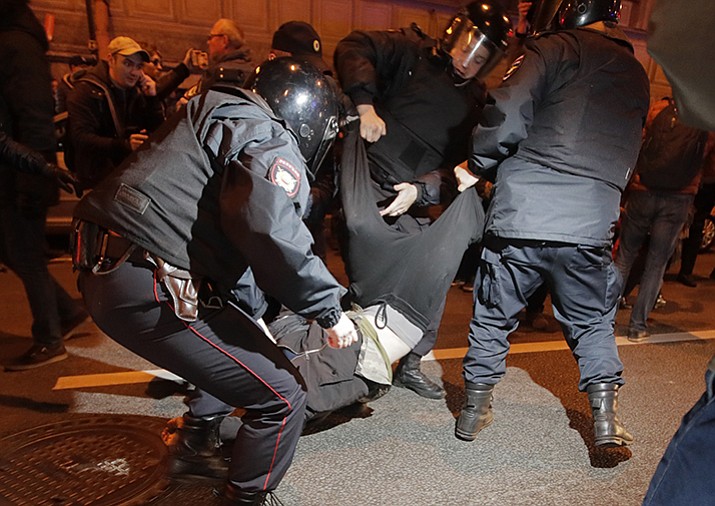 Riot police officers detain a protester during a rally in St.Petersburg, Russia, Saturday, Oct. 7. Supporters of opposition leader Alexei Navalny rallied across Russia, heeding his call to pressure authorities into letting him enter the presidential race with a wave of demonstrations on President Vladimir Putin’s 65th birthday.

MOSCOW (AP) — In a challenge to President Vladimir Putin on his 65th birthday, protesters rallied across Russia on Saturday, heeding opposition leader Alexei Navalny’s call to pressure authorities into letting him enter the presidential race.

Police allowed demonstrators in Moscow to rally near the Kremlin in an apparent desire to avoid marring Putin’s birthday with a crackdown. A bigger rally in St. Petersburg, Putin’s hometown, was disbanded by police after protesters blocked traffic and attempted to break through police cordons.

The rallies came as Navalny himself is serving a 20-day jail term for calling for an earlier unsanctioned protest.

In Moscow, several hundred protesters, most of them students, gathered on downtown Pushkinskaya Square, waving Russian flags and chanting “Russia will be free!” and “Let Navalny run!” Police warned them that the rally wasn’t sanctioned and urged them to disperse, but let the protest continue for hours without trying to break it up.

Mostly teenage protesters later walked down Moscow’s Tverskaya Street toward the Kremlin, shouting “Putin, go away!” and “Future without Putin!”

LAS VEGAS (AP) — Nearly a week after the deadliest mass shooting in modern U.S. history, federal agents on Saturday started hauling away the piles of backpacks, purses, baby strollers and lawn chairs left behind when frantic concert-goers scrambled to escape raining bullets from a gunman who was shooting from his high-rise hotel suite.

FBI agents fanned out across the crime scene near the Las Vegas Strip throughout the week stacking the belongings left from last Sunday’s shooting into more than a dozen large piles. On Saturday morning, the agents were seen loading the items onto dollies and into the back of a white truck. Authorities have said they plan to return the belongings to people in the next week.

After bombshell Weinstein revelations, many ask, ‘Why now’?

That was the first question many were asking this weekend after explosive revelations came to light about Harvey Weinstein, one of Hollywood’s most powerful men, and decades of alleged sexual harassment on his part.

First, it was a question about Hollywood, where tales about Weinstein and his behavior with women had circulated for years, yet news outlets had been unable to nail down the story. But it also fed into a broader question, one that touched on the recent fates of Bill Cosby, the late Roger Ailes, and Bill O’Reilly — all rich and hugely powerful men brought down, in one way or another, by lingering accusations that finally burst into the open. What factors had enabled all those stories to emerge?

In the view of former Fox News anchor Gretchen Carlson, whose accusations led to the downfall last year of former Fox CEO Ailes, the key dynamic was women giving each other courage — spurring each other to tell their stories despite the risk of retaliation.

“When one woman decides to finally say ‘enough already,’ the courage can be contagious,” Carlson said in an email message Friday, a day after the bombshell New York Times report on Weinstein. “And that’s what we are seeing now. Women are saying they aren’t going to take it anymore. They will have their voices heard.”

PHOENIX (AP) — Arizona Republican U.S. Sen. Jeff Flake’s re-election race is becoming a case study in the GOP’s convulsions among the establishment, a furious base and angry donors.

After bucking Donald Trump in a state the president won, Flake is bottoming out in polls. Yet Republicans look like they may be stuck with a hard-core conservative challenger who some fear could win the primary but lose in the general election.

A White House search for a candidate to replace former state Sen. Kelli Ward in the primary appears to have hit a wall. And now conservatives want to turn Arizona into the latest example of a Trump Train outsider taking down a member of the GOP establishment.

“People are fooling themselves if they think Jeff Flake is anything but a walking dead member of the United State Senate,” said Andy Surabian, whose Great America Alliance is backing Ward.

Police: Car crash in London is traffic accident, not terror

LONDON (AP) — A car crash that injured 11 people outside a major London tourist attraction Saturday sparked fears of a terrorist attack but turned out to be simply a traffic accident, London police said.

The accident at 2:20 p.m. outside the popular Natural History Museum in the heart of central London brought a gigantic police response, including helicopters and hazardous area response teams, because of terrorist concerns.

Police said 11 people were injured when a car apparently mounted the pavement and hit pedestrians. Nine people were hospitalized with head and leg injuries that were not judged to be life-changing.

Panicky scenes ensued after the pedestrians were struck and it took nearly four hours for police to reassure the anxious public that it was not another terrorist attack.

Britons in general, and Londoners in particular, have been jumpy after a string of extremist attacks this year, including deadly attacks using vehicles to hit pedestrians on Westminster Bridge and London Bridge.

Minnesota man lived with bodies of mom, brother for year

A Minnesota man who lived in a house with the decomposing bodies of his mother and twin brother for about a year said he could not bring himself to report their deaths to authorities.

“I was traumatized,” Robert James Kuefler told The Associated Press on Saturday. “What would you do?”

White Bear Police Capt. Dale Hager said Kuefler, 60, was charged this week with interference with a dead body or scene of death because Kuefler moved his brother’s body. Hager said both the brother and the mother died of natural causes in 2015.

Several months after their deaths, Kuefler wrote to other family members in a Christmas card that both were in bad health and could not talk on the phone and did not want visitors. Police did not find the bodies until September 2016, when a neighbor reported that the Kueflers’ lawn in the Minneapolis suburb of White Bear Lake was overgrown and that it had been a long time since she had seen activity at the house, the St. Paul Pioneer Press reported.

SEATTLE (AP) — Police arrested rapper Nelly early Saturday after a woman said he raped her on his tour bus in a town outside Seattle, an accusation the Grammy winner’s attorney staunchly denied.

The woman called 911 to report being sexually assaulted by Nelly on the tour bus, police said in a statement.

He will have his first appearance before a judge “at some point,” Stocker said. Nelly was scheduled to perform in Ridgefield, Washington, on Saturday night.

Nelly’s attorney, Scott Rosenblum, said Saturday afternoon that the singer was released from jail pending the investigation, and he is expected to be at the Ridgefield show.