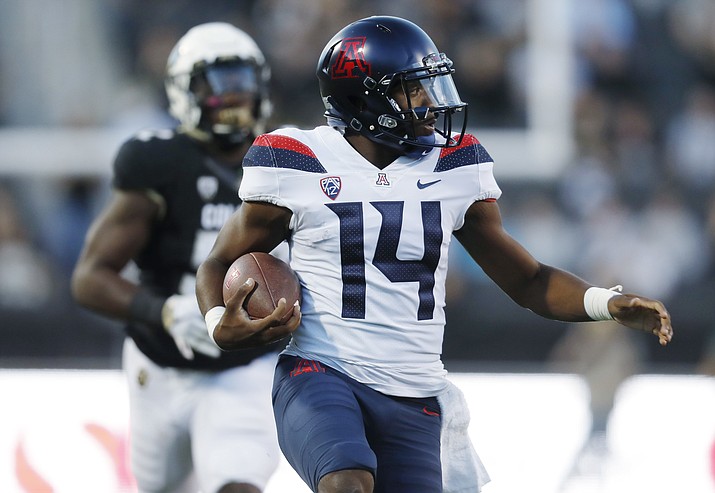 Arizona quarterback Khalil Tate, front, runs past Colorado defensive end Leo Jackson III on the way to a touchdown in the first half of an NCAA college football game. (David Zalubowski/AP)

BOULDER, Colo. — Backup Khalil Tate rushed for 327 yards, an FBS record for a quarterback, and accounted for five touchdowns to help Arizona hold off Colorado 45-42 on Saturday night.

Tate entered the game after Brandon Dawkins took a late hit out of bounds on the opening drive. Dawkins stood on the sideline with his helmet in his hand as Tate flawlessly orchestrated the offense.

Tate was hardly touched all night. He broke the record by a QB on his final run on the evening — a 31-yard scamper that also sealed the win. The mark was held by Northern Illinois’ Jordan Lynch, who gained 321 yards rushing on Nov. 26, 2013.

What’s more, it was the second-most ever in Arizona history. The Wildcats’ record for yards rushing in a game is held by Ka’Deem Carey, who gained 366 in 2012 against Colorado. Tate, who was banged up earlier in the year, averaged 23.4 yards per carry.

“We didn’t even know his number, to be quite honest,” Colorado defensive back Ryan Moeller said.

The Buffaloes certainly do now.

“This was a pretty special performance,” Arizona coach Rich Rodriguez said. “Khalil and the running game kind of saved us, for sure.”

Phillip Lindsay sparked the offense for Colorado (3-3, 0-3) with a career-high 281 yards rushing on a school-record 41 carries and three touchdowns.

Colorado was its own worst enemy in dropping a third straight conference game. The Buffaloes committed 12 penalties for 110 yards, including two late hits.

Despite all that, Colorado trailed 45-42 after Lindsay’s 11-yard TD run with 5:04 remaining. But Tate picked up a big third-down conversion with his arm — an 8-yard strike to Bryce Wolma — and then clinched the game with his long third-down run with just over a minute remaining.

Dawkins appeared dinged after taking a late hit out of bounds from linebacker Drew Lewis. He was looked at by the trainer as Tate jogged into the game. It was difficult to even entertain the notion of bringing Dawkins back in, though.

Colorado had a 19-play, 85-yard drive that took 9 minutes, 34 seconds. It was fittingly capped off by Lindsay’s 1-yard TD plunge. Lindsay had 14 carries for 80 yards on the drive, including picking up two short fourth-down conversions.

Despite the loss, it was a memorable night for Lindsay, who became the school’s career leader in all-purpose yards with a run in the third quarter. He surpassed Rodney Stewart’s mark of 4,828 yards set from 2008-11.

James Stefanou’s 50-yard attempt to end the first half curved wide left. The miss snapped a streak of nine straight field goals for the 30-year-old freshman from Australia. The school record of 10 was set by Mason Crosby.

Arizona: Tate or Dawkins? Dawkins or Tate? Doesn’t seem much of a dilemma, given the play of Tate. “I don’t mind you asking that,” Rodriguez said. “Khalil played pretty well today.”

Colorado: The Buffaloes have a steep climb ahead for any fleeting shot at defending their Pac-12 South crown.

Arizona: Plays UCLA, which has won five straight in the series. The Bruins are 24-15-2 all-time against the Wildcats.

Colorado: Travels to Oregon State. The Beavers lead the series 5-4.