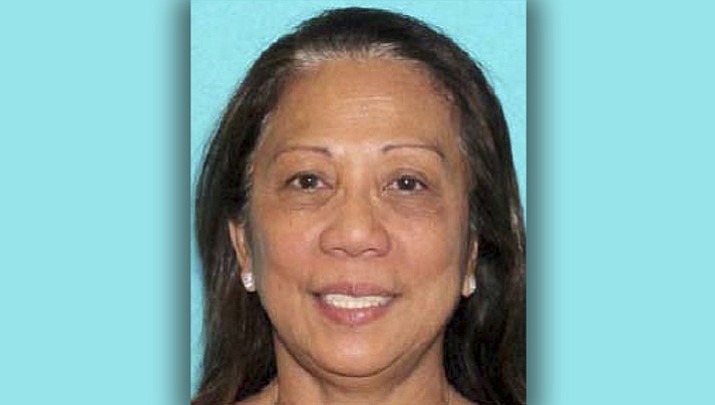 Las Vegas gunman Stephen Paddock's girlfriend, Marilou Danley, 62, who was in the Philippines at the time of the Sunday night shooting, was met by FBI agents at the Los Angeles airport late Tuesday. (Las Vegas Metropolitan Police Department)

Marilou Danley a "person of interest" in the attack

LAS VEGAS (AP) — The Las Vegas gunman's girlfriend returned to the U.S. overnight after a weekslong trip abroad and was met by investigators seeking to question her for clues to what drove Stephen Paddock to slaughter 59 people from his high-rise hotel suite.

More than two days after the deadliest mass shooting in modern U.S. history, the question of why someone with no known record of violence or crime would open fire on a country music festival was unanswered.

Paddock's girlfriend, Marilou Danley, 62, who was in the Philippines at the time of the Sunday night shooting, was met by FBI agents at the Los Angeles airport late Tuesday, according to a law enforcement official who wasn't authorized to discuss the matter publicly and spoke to The Associated Press on condition of anonymity.

Sheriff Joseph Lombardo, who has called Danley a "person of interest" in the attack, said on Tuesday that "we anticipate some information from her shortly" and that he is "absolutely" confident authorities will find out what set off Paddock.

The 64-year-old high-stakes gambler and retired accountant from Mesquite, Nevada, killed himself as police closed in on his 32nd-floor room at the Mandalay Bay hotel casino.

Whatever his motive, authorities said he planned the murderous attack in great detail, not only stockpiling nearly two dozen guns in his hotel room but setting up cameras in the peephole and on a service cart outside his door, apparently to watch for police coming for him.

During the Sunday night rampage, a hotel security guard who approached the room was shot through the door and wounded in the leg.

"The fact that he had the type of weaponry and amount of weaponry in that room, it was preplanned extensively," the sheriff said, "and I'm pretty sure he evaluated everything that he did and his actions, which is troublesome."

On Wednesday, President Donald Trump was set to arrive in Las Vegas to meet with public officials, first responders and some of the 527 people injured in the attack. At least 45 patients at two hospitals remained in critical condition.

Paddock had been stockpiling guns since 1982 and bought 33 of them, mostly rifles, over the past year alone, right up until three days before the attack, Jill Snyder, an agent with the federal Bureau of Alcohol, Tobacco, Firearms and Explosives, told CBS on Wednesday.

He had rigged 12 semi-automatic rifles with devices that allowed the guns to fire like an automatic weapon, she said. Authorities previously disclosed that he had such "bump stock" devices with him at the hotel.

Snyder said authorities would not have been notified of the rifle purchases but would have been informed if two or more guns were bought at one time.

Paddock transferred $100,000 to the Philippines in the days before the shooting, a U.S. official briefed by law enforcement but not authorized to speak publicly because of the continuing investigation told the AP on condition of anonymity.

Investigators are still trying to trace that money and are also looking into a least a dozen financial reports over the past several weeks that said Paddock gambled more than $10,000 per day, the official said.

Danley's sisters in Australia said in a TV interview there that they believe she couldn't have known about Paddock's murderous plans, and that he must have sent her away so she wouldn't interfere.

They said Danley is "a good person" who would've stopped Paddock had she been there.

"She probably was even (more) shocked than us because she is more closer to him than us," said one of the sisters, who live near Brisbane.