What you need to know to survive an active-shooter incident
Expert: ‘Evil people’ will find a way to carry out their plans 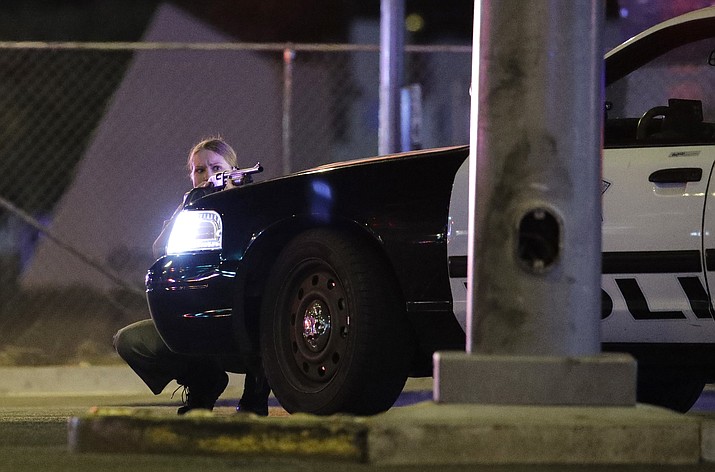 A police officer takes cover behind a police vehicle during a shooting near the Mandalay Bay resort and casino on the Las Vegas Strip late Sunday, Oct. 1, 2017, in Las Vegas. (John Locher/AP)

LAS VEGAS (AP) — Two off-duty Arizona Department of Public Safety employees were injured in the shooting at a music festival in Las Vegas that killed 58 people and injured at least 515 others.

A trooper underwent surgery after he was struck in the hand and back side by shrapnel from the gunfire.

A DPS criminologist also suffered cuts and scrapes, but wasn’t hit by a bullet or shrapnel. Both have since been released from a hospital.

A dozen DPS employees were in Las Vegas for a homicide investigators conference. And according to the Prescott and Prescott Valley police departments, five officers were also in Las Vegas for training, but had no involvement in the incident.

Five off-duty officers from the Mesa Police Department also attended the festival, but were not in town for the homicide investigators conference.

The department says one Mesa officer suffered a minor injury, though the agency declined to provide specifics on the injury.

Based on what we know at this point, it may well have been impossible to prevent the shooting rampage that Stephen Paddock undertook on the Las Vegas Strip Sunday night, Oct. 1.

Early information suggests that he passed the required background checks to buy whatever legal weapons he had in his Mandalay Bay hotel room.

And the automatic weapons Paddock fired into the crowd were already illegal for civilians to own. How he obtained them, or whether he modified legal guns to fire in automatic mode, is still under investigation.

That leaves us with this question: What can you do if you’re confronted with a nightmare like the one the people attending this concert faced?

“The first thing people need to do is, whenever they’re in a large crowd, especially at a soft-target (event), like an outdoor concert … is to be aware of the surroundings,” said Tom Foley, an Embry-Riddle Aeronautical University expert on active-shooter events.

“Be aware of what’s going on around you, and if you hear some loud bangs, unfortunately, in today’s reality, you may want to think that they’re gunshots versus firecrackers,” he said.

The next thing to do, if you can, is figure out where the shots are coming from so you can find cover.

But, Foley said, it’s difficult to think clearly when you’re under attack. That’s why he advocates working out a plan mentally in advance. Survey the area, he advised, and find your quickest way out, for example.

“Rehearsing these things mentally, in advance, can actually be very helpful,” he said. “When you react, you’re going to react along the lines of what you’ve rehearsed in your head.”

Several eyewitness accounts said that people would start to run and then stop and crouch when shots were heard, and video of the scene shows exactly that happening.

“It does make sense to move while the shooter is reloading,” Foley said, but you need to move toward specific cover, not randomly.

Foley said that, from what he had heard by Monday afternoon, he was skeptical of Paddock’s brother claim that the suspect had “just snapped.”

“Nobody just snaps, and based on the information that’s available right now, it seems pretty clear that this was a planned attack,” Foley said, and that Paddock appears to have thought through the attack well in advance.

“You have evil people with twisted ideas, and they’re going to find a way to do harm if they really put their mind to it. It’s unfortunate and it’s very sad,” Foley said, “but I can’t say I’m too terribly surprised.”