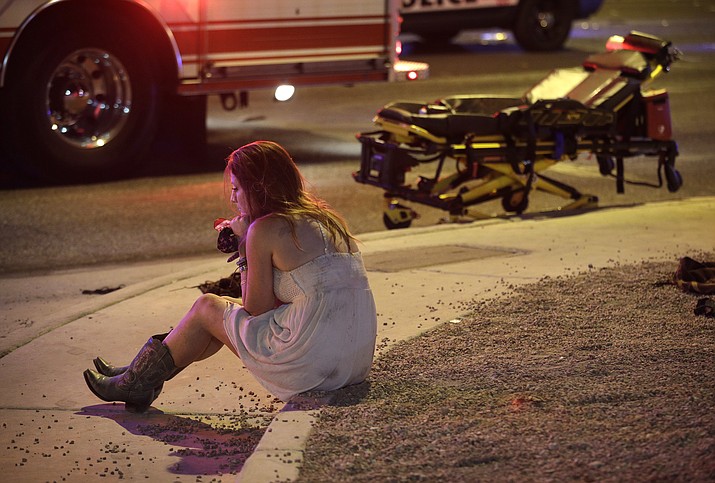 A woman sits on a curb at the scene of a shooting outside of a music festival along the Las Vegas Strip. (John Locher/AP)

Melissah Burke and her husband Stephen, of Seattle, walk along the Las Vegas Strip near Mandalay Bay hotel and casino Monday, Oct. 2, 2017, in Las Vegas. The couple, who were attending the music festival last night where a mass shooting occurred, found refuge in a nearby apartment and casino. (Ronda Churchill/AP)

Debris is strewn through the scene of a mass shooting at a music festival near the Mandalay Bay resort and casino on the Las Vegas Strip, Monday, Oct. 2, 2017, in Las Vegas. (John Locher/AP)

LAS VEGAS (AP) — The rapid-fire popping sounded like firecrackers at first, and many in the crowd of 22,000 country music fans didn't understand what was happening when the band stopped playing and singer Jason Aldean hustled off stage.

"That's gunshots," a man could be heard saying emphatically on a cellphone video in the nearly half-minute of silence and confusion that followed. A woman pleaded with others: "Get down! Get down! Stay down!"

Then the pop-pop-pop noise resumed. And pure terror set in.

"People start screaming and yelling and we start running," said Andrew Akiyoshi, who provided the cellphone video to The Associated Press. "You could feel the panic. You could feel like the bullets were flying above us. Everybody's ducking down, running low to the ground."

While some concertgoers hit the ground Sunday night, others pushed for the crowded exits, shoving through narrow gates and climbing over fences as 40- to 50-round bursts of fire rained down on them from the 32nd floor of the Mandalay Bay casino hotel.

By Monday afternoon, 59 victims were dead and 527 injured in the deadliest mass shooting in modern U.S. history.

"You just didn't know what to do," Akiyoshi said. "Your heart is racing and you're thinking, 'I'm going to die.'"

The gunman, identified as Stephen Craig Paddock, a 64-year-old retired accountant from Mesquite, Nevada, killed himself before officers stormed Room 135 in the gold-colored glass skyscraper.

The avid gambler who according to his brother made a small fortune investing in real estate had been staying there since Thursday and had busted out windows to create his sniper's perch roughly 500 yards from the concert grounds.

The motive for the attack remained a mystery, with Sheriff Joseph Lombardo saying: "I can't get into the mind of a psychopath at this point."

Paddock had 23 guns — some with scopes — in his hotel room, authorities said. They found two gun stocks that allow the shooter to replicate fully automatic fire, and are investigating whether weapons used in the massacre had those modifications, according to a U.S. official briefed by law enforcement who spoke on condition of anonymity because the investigation is still unfolding.

At Paddock's home, authorities found 19 more guns, explosives and thousands of rounds of ammunition. Also, several pounds of ammonium nitrate, a fertilizer that can be turned into explosives such as those used in the 1995 Oklahoma bombing, were in his car, the sheriff said.

The FBI said it found nothing so far to suggest the attack was connected to international terrorism, despite a claim of responsibility from the Islamic State group, which said Paddock was a "soldier" who had recently converted to Islam.

In an address to the country, President Donald Trump called the bloodbath "an act of pure evil" and added: "In moments of tragedy and horror, America comes together as one. And it always has." He ordered flags flown at half-staff.

With hospitals jammed with victims, authorities put out a call for blood donations and set up a hotline to report missing people and speed the identification of the dead and wounded. They also opened a "family reunification center" for people to find loved ones.

More than 12 hours after the massacre, bodies covered in white sheets were still being removed from the festival grounds.

The shooting began at 10:07 p.m., and the gunman appeared to fire unhindered for more than 10 minutes, according to radio traffic. Police frantically tried to locate him and determine whether the gunfire was coming from Mandalay Bay or the neighboring Luxor hotel.

At 10:14 p.m., an officer said on his radio that he was pinned down against a wall on Las Vegas Boulevard with 40 to 50 people.

"We can't worry about the victims," an officer said at 10:15 p.m. "We need to stop the shooter before we have more victims. Anybody have eyes on him ... stop the shooter."

Near the stage, Dylan Schneider, a country singer who performed earlier in the day, huddled with others under the VIP bleachers, where he turned to his manager and asked, "Dude, what do we do?" He said he repeated the question again and again over the next five minutes.

Bodies were lying on the artificial turf installed in front of the stage, and people were screaming and crying. The sound of people running on the bleachers added to the confusion, and Schneider thought the concert was being invaded with multiple shooters.

"No one knew what to do," Schneider said. "It's literally running for your life and you don't know what decision is the right one. But like I said, I knew we had to get out of there."

He eventually pushed his way out of the crowd and found refuge in the nearby Tropicana hotel-casino, where he kicked in a door to an engineering room and spent hours there with others who followed him.

The shooting started as Aldean closed out the three-day Route 91 Harvest Festival. He had just begun the song "When She Says Baby," and the first burst of nearly 50 shots crackled as he sang, "It's tough just getting up."

Muzzle flashes could be seen in the dark as the gunman fired away.

The crowd, funneled tightly into a wide-open space, had little cover and no easy way to escape. Victims fell to the ground, while others fled in panic. Some hid behind concession stands or crawled under parked cars.

Faces were etched with shock and confusion, and people wept and screamed.

Tales of heroism and compassion emerged quickly: Couples held hands as they ran through the dirt lot. Some of the bleeding were carried out by fellow concertgoers. While dozens of ambulances took away the wounded, some people loaded victims into their cars and drove them to the hospital. People fleeing the concert grounds hitched rides with strangers, piling into cars and trucks.

Some of the injured were hit by shrapnel. Others were trampled or were injured jumping fences.

Las Vegas Mayor Carolyn Goodman said the attack was the work of a "crazed lunatic full of hate."

The sheriff said authorities believe Paddock acted alone. While Paddock appeared to have no criminal history, his father was a bank robber who was on the FBI's most-wanted list in the 1960s.

As for why Paddock went on the murderous rampage, his brother in Florida, Eric Paddock, told reporters: "I can't even make something up. There's just nothing."

Hours after the shooting, Aldean posted on Instagram that he and his crew were safe and that the shooting was "beyond horrific."

"It hurts my heart that this would happen to anyone who was just coming out to enjoy what should have been a fun night," the country star said.

Before Sunday, the deadliest mass shooting in modern U.S. history took place in June 2016, when a gunman who professed support for Muslim extremist groups opened fire at a gay nightclub in Orlando, Florida, killing 49 people.

A suicide bombing at an Ariana Grande concert in Manchester, England, killed 22 people in May. Almost 90 people were killed in 2015 at a concert in Paris by gunmen inspired by the Islamic State.

This story has been corrected to show that Paddock had 17 guns in all in his hotel room.

The content of the videos below may be disturbing to some viewers. Viewer discretion is advised.