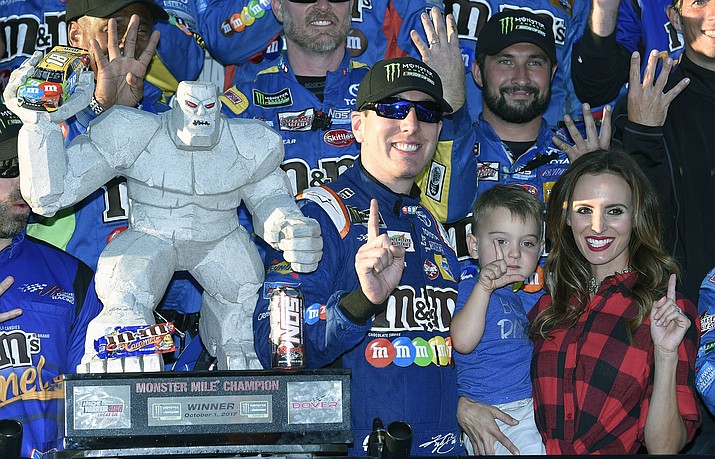 Kyle Busch, third from right, poses with the trophy with his son Brexton, second from right, and wife Samantha, right, after he won the NASCAR Cup Series auto race, Sunday, Oct. 1, 2017, at Dover International Speedway in Dover, Del. (Nick Wass/AP)

DOVER, Del. — Chase Elliott rubbed his head and leaned against his car, crestfallen as he replayed the final laps in his mind. Jimmie Johnson, his champion teammate, walked over to offer some encouragement and let Elliott vent.

“I anticipated them being cuss words,” Johnson said, “and they were.”

Elliott had it, the first win in 70 career Cup starts in his sight, the white flag about to drop.

But the son of a NASCAR Hall of Fame driver simply could not find his way out of a thicket of traffic and Kyle Busch was ready to pounce. Busch spoiled Elliott’s bid at his first career NASCAR Cup Series victory, taking the lead with two laps left to win Sunday at Dover International Speedway.

Elliott, largely expected to lead NASCAR’s next generation of stars, was in stunned disbelief that he let the lead slip away.

“I’m just so disappointed in myself,” Elliott said. “Golly. I couldn’t have had it any easier. I gave it away.”

Busch, the 2015 Cup champion, went high on the concrete track and zipped past Elliott to win for the second straight week. He won for the fourth time in the No. 18 Toyota and is streaking at the right time as NASCAR’s playoffs head into the second round.

While Elliott was consoled, Busch took his customary bow.

He injected a ho-hum race with a thrilling finish and perhaps the best two closing laps of the season. Busch is 24 points behind fellow Toyota driver Martin Truex Jr. for the points lead and was already safely in the field of 12.

“As far as Chase get out there, I wasn’t sure I’d run him back down,” Busch said. “The only thing Chase could have done differently was just move around and try and to get out of the wave of the cars that were in front of him. I was actually surprised he didn’t.”

Elliott was second, followed by Johnson, Truex and Kyle Larson.

Elliott followed in some superstar footsteps when he made his Cup debut in 2015. Bill Elliott was a two-time Daytona 500 champion and was named NASCAR’s most popular driver a record 16 times. Chase Elliott also took over the No. 24 Chevrolet when four-time Cup champion Jeff Gordon retired.

Gordon attended the race and exchanged words with Newman on pit road. Newman, who finished a lap down in 13th, was one of the drivers that held up Elliott down the stretch and contributed to his collapse.

Newman was clearly frustrated after missing the playoff cutoff by just two points.

“You don’t think I was racing for my own position,” Newman asked Gordon.

Elliott was crushed, Newman was irked, Gordon stirred the pot.

About the only one really happy — well, Ricky Stenhouse Jr., who clinched the final transfer spot was thrilled — was Busch. The Joe Gibbs Racing driver followed last week’s win at New Hampshire with his 42nd career Cup victory.

Truex won the opener at Chicagoland and followed with a fifth and fourth. With a series-high five wins, he’s still the driver to beat for the championship.

“Maybe this closes the gap that the 78 had on us a little bit,” Busch said.

Elliott finished second at Chicagoland but NASCAR penalized the team for a modification to his Chevrolet and he was stripped of playoff point and his crew chief was suspended. The 24 will get another close look in a thorough inspection this week. But Elliott’s time as a perennial race contender has arrived, even if his checkered flag was denied at Dover.

“I thought if I had a clean track, I could have run as fast as he did, but I didn’t, and I should have done something different,” Elliott said. “So that’s just on me, and he did a better job than I did.”

Here are other items of note from Dover:

Elliott was runner-up and Johnson was third, giving Hendrick Motorsports a sorely needed confidence boost in the second. Johnson had his first top-five finish since he won the first Dover race in June.

“I wished I would have qualified better. I really think we had a shot at winning the race today,” Johnson said.

The race was stopped for 15 minutes, 9 seconds when Jeffrey Earnhardt spun at the pit road entrance and hit sand barrels.

NASCAR again stood in unison for the national anthem, a week after a pair of team owners said they would fire anyone who took a knee.

The first race of the second playoff round takes place at Charlotte Motor Speedway. Dillon won his first career Cup race there in May and Johnson won at the track in October 2016.