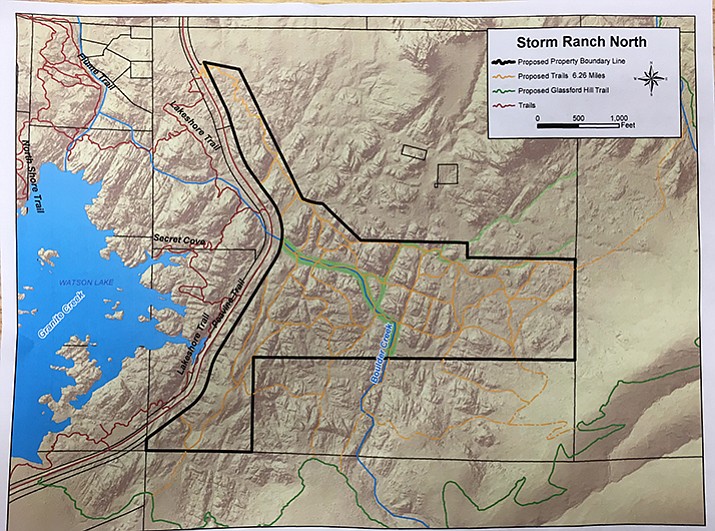 The Storm Ranch North parcel is 160 acres, which the city is purchasing for $2 million from the voter-approved open space funding. (Courtesy image)

With a 160-acre purchase this week, the City of Prescott has added considerably to its Granite Dells-area open-space holdings.

The Prescott City Council approved the $2 million Storm Ranch North purchase in unanimous action on Tuesday, Nov. 28. The acreage adds to the nearly 250 acres of open land that the city acquired in 10 previous Dells-area purchases, which date back to about 2001.

The total of about 400 acres of open space is in addition to the 800 acres or so of Dells-area land the city acquired in the 1998 purchase of Watson and Willow lakes (including the surface area of the lakes).

• The 2008 purchase of the 35-acre Granite Gardens/Hazelwood parcel in the Granite Dells ($3 million).

(The city has also purchased other open space parcels that were not in the Granite Dells area.)

Recreation Services Director Joe Baynes explained that the $2 million for the Storm Ranch North parcel would come from the $3.8 million of open space/streets sales tax money that the council set aside in June 2016.

The money was the part of the remainder of the 1-percent sales tax that voters approved in 2000 for open space purchases and street improvements. That tax ended in December 2015, and a new 1-percent tax began in January 2016, exclusively for streets.

“Granite Dells has been a featured area for visitors to Prescott since the late 1800s,” Baynes told the City Council.

The Storm Ranch North parcel fronts a 0.8-mile section of the Peavine Trail — Prescott’s most visited trail, Baynes said. He emphasized that the Granite Dells-area open space is important for the city’s tourism and economic development efforts.

“We want to be on the tip of everyone’s tongue when it comes to outdoor recreation,” Baynes said, noting that the “great mix of topography” in the Storm Ranch North area would add significantly to Prescott’s tourism appeal.

After the cost of the purchase, related expenses, and recent trail easements, about $1.6 million to $1.7 million now remains in the city’s open space fund.