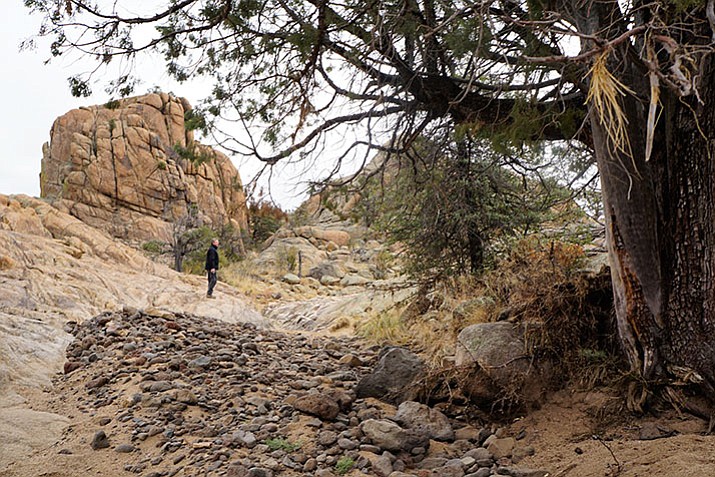 Prescott Trails and Natural Parklands Coordinator Chris Hosking checks out the possible route of a trail being planned in the Storm Ranch North parcel that the City Council approved for purchase this week. Boulder Creek runs through the parcel, and Hosking and Recreation Services Director Joe Baynes say the creek will be a prominent feature in the planned trail system. (Cindy Barks/Courier)

Ed and Virginia Seaver were among the Storm family members who negotiated the sale of 160 acres of the Storm Ranch North to the City of Prescott. The parcel is not far from the Storm homestead that is the site of the Seavers’ home. The chimney of the original Storm family ranch is in the background. (Cindy Barks/Courier)

With a 160-acre purchase this week, the City of Prescott has added considerably to its Granite Dells-area open-space holdings.

Soon, the public will be able to enjoy the same rocks that Seaver and the Storm family have ranched among for decades.

In a unanimous vote Tuesday, Nov. 28, the Prescott City Council approved the purchase of 160 acres of the Storm Ranch North for a price of $2 million. The parcel is about one-third of the 490 acres that make up Storm Ranch North.

The purchase was the result of more than a year of negotiations between city officials and Storm family members Ed and Virginia Seaver, Eleanor Huddleston, and James Harvey.

The result, say city officials, will be the permanent preservation of acreage that fronts nearly a mile of Prescott’s popular Peavine Trail, and stretches east through the heart of the Dells.

“We’re very happy about it,” Virginia Seaver said the morning after the council decision. “Actually, this is kind of the Central Park of the Prescott area.”

While the Peavine passes by spectacular rock formations including the iconic Point of Rocks, the Storm Ranch North parcel offers a glimpse into the breadth of the Dells — from the inside out.

“The Dells do not have a 3-D effect from the road,” Seaver said. But from the family ranch house, the rocks soar all around, offering a new dimension.

The parcel the city is buying begins not far from the Seavers’ home, which was built in 1970 at the original ranch site that Virginia’s grandparents Bill and Bonita Storm homesteaded in 1926.

Born and raised in the Granite Dells, Seaver sees the value of preserving the area. “I don’t want it to be rooftops,” she said.

Along with preserving another chunk of the Dells (see related story), the purchase will allow for the construction of 6.25 miles of new city trails.

As soon as escrow closes on the purchase in about two months, they say, preliminary work will get underway on the trails.

“Within 60 days, we should start trail planning and preliminary construction,” Baynes said as he walked along a path through the property.

Hosking, who estimates that he has already visited the parcel 20 to 30 times, said he has numerous ideas for how the trails will traverse the rocky terrain.

“We’ll have a variety of trails,” he said, noting that while some of the trails will be gradual (similar to the Constellation Trails), other areas will be steep and rocky — similar to the Over the Hill Trail near the Watson Lake Dam.

While the new trails will be open to a variety of users, Hosking said some will be considered highly technical for mountain bikers.

Improved regional trail connectivity will be a major benefit of the new trails through the Storm Ranch North.

Hosking and Baynes point out that trail users will be able to venture east off the Peavine to get deeper into the Dells than previously possible.

The parcel starts near the Peavine’s northern-most access point to the Lakeshore Trail, and runs south for about 0.8 mile.

Boulder Creek, which drops dramatically from the nearby Glassford Hill down through the Storm North property and ultimately intersects with the Peavine Trail, will be a prominent feature of the new trail system.

Baynes and Hosking pointed, for instance, to one area where the creek bends, carving a deep canyon through the rocks.

“I can imagine white dots through here,” said Hosking, who has worked with the Over the Hill Gang trail-building volunteers to build an extensive system of “white dot trails” that lead users through the ups and downs in other parts of the Dells.

Baynes added that the parcel’s location adjacent to sections of Arizona State Land also increases the trail options. One future plan involves connecting the Peavine to the summit of Glassford Hill through a series of trails totaling about five and a half miles, and about 1,000 feet of elevation gain.

Hosking said construction of the new trails in the Storm North parcel could take about two years to complete. Meanwhile, he said he plans to post signs that will help users to navigate back to the Peavine Trail.