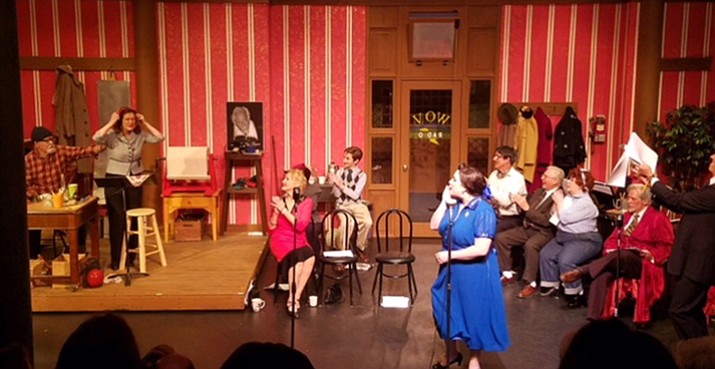 Most of us alive today can’t relate to life before television, when families gathered around the radio listening to their favorite weekly shows. Do we 21st century folk even have the ability to listen to a program that doesn’t also stimulate our visual sense?

Fortunately, Prescott Center for the Arts’ “1940s Radio Christmas Carol” doesn’t put that question to the test. There is plenty to look at in this ingenious and entertaining production.

From the point of view of a studio audience, attendees respond to large illuminated signs reading “ON AIR,” “LAUGH” and “APPLAUSE.” Depicting a radio studio of yester-decade, the stage features full height microphones, an announcer, a multitude of performers, and real foley artists (Bill Osborne and Connie Arnold) who use all manner of “audio props” to simulate the sounds of doors closing, windows breaking, wind blowing and much more. And of course, as per the era’s standard, there is nothing recorded. It’s all performed live!

But the best thing is that the show appeals to our emotions. Its presentation of the classic Dickens Christmas story, though frequently interrupted by amusing and often musical commercial breaks, is vintage “A Christmas Carol” through and through.

Sandy Vernon’s character flits effortlessly from persona to persona when she is not soloing beautifully in one of the show’s many Christmas song breaks. Ditto for Bliss Streetman, whose rapid-fire voicing in succession of all of the Cratchit children had me in stitches each and every time.

As the announcer, Sean Jeralds “improvises” on a dime when things go wrong, maintaining his upbeat demeanor no matter what.

And true to so many Christmas tales, a heartrending back story threatens to derail Dickens’ final chapter, only to have the ending delayed but not lost.

PCA’s “1940s Radio Christmas Carol” will add to your enjoyment this Christmas season. Why not take a break from the holiday preparations and treat your family to a performance of this fabulous show?