Possibility for new turf at high school fields
School board to decide on repairing, or replacement 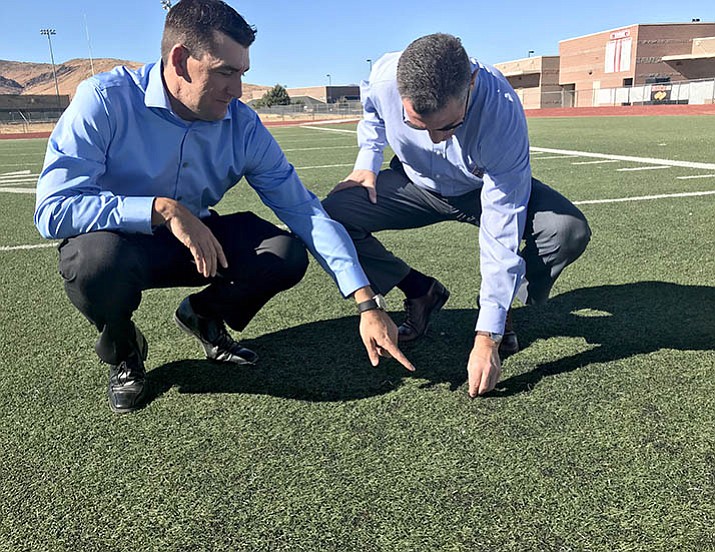 School Superintendent Dan Streeter, left, points out the rubber pellets that are exposed in the worn areas of turf on the Bradshaw Mountain High School football field. The district is looking at replacing the synthetic turf on the baseball and football fields. (Sue Tone/Tribune)

After nine years, the artificial grass is thinning, rather like areas of pink scalp showing through a star athlete’s once lush head of hair. Bradshaw Mountain High School’s athletic fields are in need of a new ’do.

The artificial turf installed in 2009 is wearing thin, said Jim Bogner, assistant superintendent of the Humboldt Unified School District, to school board members Nov. 14. He and three turf contractors recently evaluated the football and baseball fields at the high school, and determined the turf was at the end of their useful life cycles.

Installed in 2009 as part of the B Bond passed by voters, the synthetic turf has seen nine seasons of football and eight of baseball. Its eight-year warranty expired last year.

“Eight to 10 years is what you can expect to get out of it, depending on mitigating factors,” HUSD Superintendent Dan Streeter said.

Turf blades are worn down to about half their original length. Rubber pellets used to weigh down the turf and also provide cushioning now sit on top of the turf blades in some areas causing some portions to look more gray than white.

In addition, some markers have torn away from the turf; six yard markers needed to be duct taped in place just prior to the Oct. 6 varsity football game with Coconino High School, Bogner said.

The ground below the turf around base and home plates at the baseball field has shifted and is uneven. The dirt-colored turf of the base paths are shedding causing thinning of the turf.

One can see the multiple patched areas where batters and catchers stand around home plate. Turf companies now provide sections that can be flipped over to get full use of the material.

“Hypothetically, if we don’t do this, if we continue with repairs, how many more years can we get out of this?” asked board Vice President Suzie Roth.

Bogner said, not being a turf expert he didn’t know.

“I’m looking at it, and I’m thinking about safety, wanting the fields to be safe. I’m not saying it’s unsafe now, but I don’t want to get to that point,” he said.

Board member Dina Battaglia followed up on the safety issue requesting information from potential contractors on number of injuries sustained with their product before she makes a decision.

“As a former amateur athlete and sports fan, injuries are always my No. 1 concern. For me, it’s injury over cost for me,” she said.

The previous school board looked at cost savings when they made the decision to install the synthetic turf. Board President Rich Adler said expenditure versus savings was the biggest discussion point at that time.

Hellas Construction, Inc., which installed the turf in 2009, said the life span of their product is usually 10-to-12 years. They indicated the turf field would pay for itself in cost savings after 10 years.

Savings on water use alone ran about $30,000 per year in 2008. Streeter estimated the district saved $100,000 to $200,000 per year in expenses involving seeding, fertilizing, resodding, maintenance, weekly mowing, and striping the fields. That doesn’t factor in labor or the costs involved when weather conditions caused cancellations and the Bradshaw Bears rescheduled games at Valley locations necessitating transportation, bus drivers and extra expenditures.

The initial installation was part of a $1.9 million project that included a new eight-lane running track, jump pits, pole vault, shot put and discus areas, sidewalks, and the preparation, materials and installation of the synthetic turf football and baseball fields.

Turf replacement and some leveling of the baseball field would be much less, running between $635,000 and $850,000, Bogner said.

To go back to a natural grass field would be costly as there is four feet of rock underneath that would need to be excavated and disposed of before replacing with sod.

In addition to the varsity and junior varsity football teams that use the field, the high school has four soccer teams, said Athletic Director Tony Miller. Granite Mountain Middle School athletes also practice on the field. The turf is available 180 days a year for Bradshaw’s physical education classes and track and field events. Youth sports teams are on the fields every weekend, Bogner said.

Adler said he’d like the board to look again at its usage facility fees as they are a source of revenue. “In another eight or nine years, we’ll have to do this again, and we won’t have bond money,” he said.

Recycling the old material is an option. In fact, Bogner said, as soon as word got out that the board was considering replacing the turf, he heard from various schools wanting to use the old turf in their schoolyards and playgrounds. Even at the high school, he is looking at reusing it in the courtyard area.

“The board intentionally set aside bond dollars for this,” Streeter said. “This isn’t something that has caught us off-guard.”

The district retained about $1 million in bond money and will need to expend that by the end of this fiscal year. It also is looking at the athletic fields at Humboldt Elementary School which will need engineering design for drainage issues.

Bogner said packaging both fields at the high school to be completed at the same time would keep down expenses. He has met with several contractors and spoken with other districts about companies and options. HUSD could use existing contractors or go out to bid, said Finance Director Cynthia Windham.

Three benefits resulted from putting in artificial turf back in 2009, Streeter said.