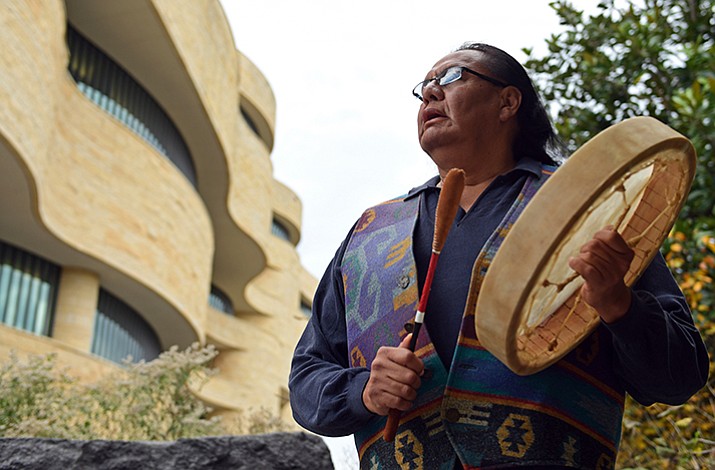 Dennis Zotigh poses for a photo outside the National Museum of the American Indian in Washington, Friday. (Susan Walsh/AP)

FLAGSTAFF — As fierce debate rages about “taking a knee” during the national anthem to protest social injustice, Native Americans have a unique take on the issue as the ethnic group with the highest military-service rate, and an enduring regard for warriors.

Supporters of the movement say it’s not intended as a criticism of the military. But such a protest would be unthinkable for many at tribal events because the flag and veterans are so deeply intertwined - and revered.

“I’ll stand. I’ll do whatever I think is appropriate to honor them first, and then over there, I can debate about whether the country is living up to its side of the deal when it comes to treaty rights, water rights, social issues that affect a lot of the tribes,” said Erny Zah, a singer, powwow emcee and dancer from the Navajo Nation in the Southwest. “Very rarely do I hear anything that negates the veterans’ services, or the country’s disparagement of whatever social issues might be happening at the time.”

American Indians have served in the U.S. military at higher rates per capita than any other ethnic group despite a history of suffering at the hands of Europeans, and even in times when they were denied U.S. citizenship and the right to vote. Serving in the military and protecting one’s homeland is considered a continuation of warrior traditions.

Many tribes even have their own national anthems known as flag songs that focus on veterans. They’re popular among Plains tribes from which the modern powwow originated, said Dennis Zotigh of the Smithsonian National Museum of the American Indian. Powwows are social gatherings, generally with competitive dancing.

Other tribes including the Lumbee, Eastern Cherokee, Mohegan and Pequot on the East Coast, and Cochiti, Jemez and Taos pueblos in the Southwest also composed their own flag songs, telling their stories and admiration for the U.S. flag, Zotigh said.

The reverence on display is almost sacred, he said. Warriors are blessed through ceremonies before they encounter enemies, and welcomed back with parades, giveaways, eagle feathers, cleansing ceremonies and songs. Powwows often have a grand entry solely for veterans, who line up and can take hours to introduce themselves by name, military affiliation and years served.

Singers sit around a drum, starting a melody and slow beat before the words of flag songs repeat.

“The president’s flag will stand forever,” reads a portion of a Sioux song.

“Our country, our land is the most powerful country in the world,” says a Hidatsa song.

“Under the nation’s flag, generations will stand forever. So do I,” says another composed on the Pine Ridge reservation in South Dakota and first sung in a World War II victory celebration.

While the U.S. flag is displayed prominently as a reminder of the warrior societies from which powwows originated, so too is the eagle staff - a universal flag of people native to North America, said Zotigh, who is Kiowa, Santee Dakota and Ohkay Owingeh. The flag songs also are sung while the U.S. flag is lowered and raised on tribal land, many times by veterans and using a flag given to a deceased veteran’s family.

“When our people have their own doings, we’re going to go along with those folks,” said Herb Adson, a Pawnee from Oklahoma and singer with Southern Thunder. “If they want to raise the flag, that flag song is sung, everyone is going to stand up.”