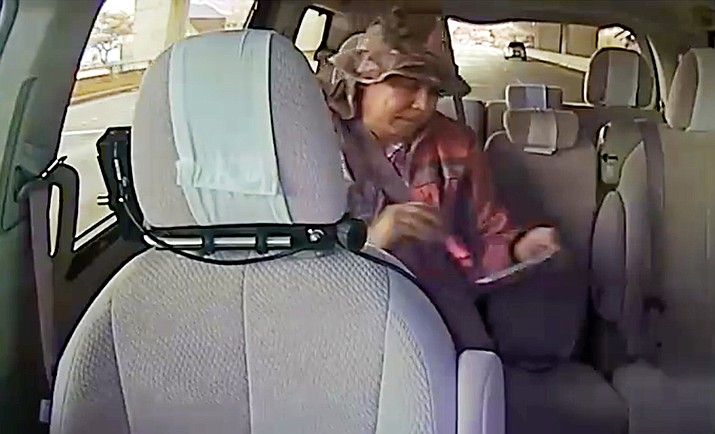 Escaped mental patient Randall Saito uses a personal device inside a taxi in Honolulu, en route to Honolulu airport and a flight from Oahu to the neighboring island of Maui, then boarding another plane to San Jose, Calif. Saito left the 202-bed Hawaii State Hospital outside Honolulu, where he has been committed for 36 years since being acquitted of murder by reason of insanity. Saito was captured in Stockton, Calif., Wednesday. (Charley's Taxi via AP)

Inmate Surprised By Escape from Hawaii to Calif. by Associated Press

FRENCH CAMP, Calif. (AP) — A man who acknowledges killing a woman nearly 40 years ago said Friday that he is surprised he was able to walk out of a Hawaii psychiatric hospital and make it to California before being captured.

Randall Saito spoke to The Associated Press in a jail near Stockton, California, before briefly appearing in court and telling a judge he doesn't want to go back to Hawaii.

"I was surprised that it actually worked," the 59-year-old said in the jail interview. "I was expecting almost every leg of the way, I was expecting them to be right around the corner just going to nab me."

Saito left Hawaii State Hospital in suburban Honolulu on Sunday, got a taxi to the airport and took a charter plane to Maui. From there, he caught another flight to San Jose.

He refused to say if anyone helped him escape, where he got the money to travel or how he acquired what he called "a pretty good" fake ID. He insisted that he only escaped to show that he should be free.