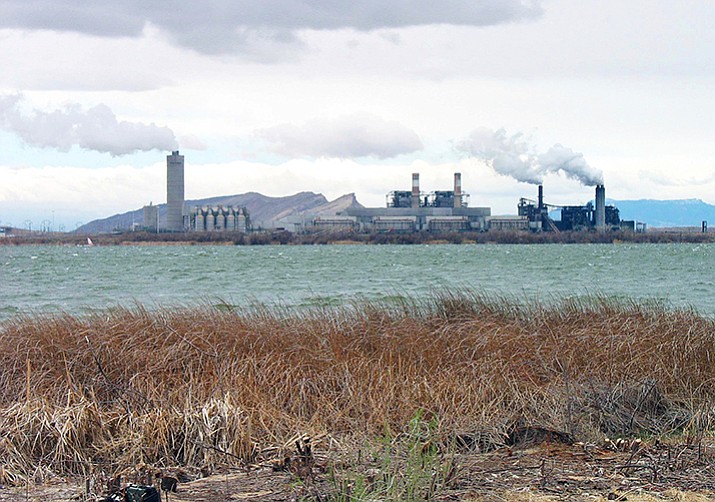 This April, 2006 file photo shows the Four Corners Power Plant in Waterflow, N.M., near the San Juan River in northwestern New Mexico. Unions that represent Navajo workers say contractors at a northwestern New Mexico power plant are violating tribal labor laws. The tribe enacted the Navajo Preference in Employment Act in 1985, requiring the hiring of qualified Navajos over other applicants, to keep Navajos working on the reservation where jobs are scarce. (AP Photo/Susan Montoya Bryan, File)

FLAGSTAFF — Unions that represent Navajo workers in New Mexico say tribal members are being passed over for jobs at a power plant on the reservation in violation of Navajo labor laws.

Arizona Public Service Co. leases the land from the Navajo Nation and runs the power plant. APS spokesman Robert Charles says contractors and subcontractors must abide by the Navajo Preference in Employment Act, which means qualified Navajos would be considered before other applicants.

A regional carpenters union and a New Mexico group that represents 15 labor unions say they’re concerned that’s not happening. In an area where unemployment hovers around 50 percent and jobs are scarce, they say the law is vital for protecting Navajo workers.

“If we do get the first priority or they go by the Navajo Preference in Employment Act, that would give a lot of these Navajo families and the Navajo people here who have the qualifications ... good, steady work to be near home with their families,” said Chris Frank, a Navajo member of the Southwest Carpenters Local 407.

Los Angeles-based AECOM, which is overseeing the installation of the pollution controls, declined to comment.

The Navajo Nation enacted the preference law in 1985 to keep Navajos working on the reservation. APS is exempt from it under its lease but has a separate preference plan for hiring Native Americans.

The first step in bringing forth alleged violations is the Office of Navajo Labor Relations. The complaints can be pursued further through the tribe’s Labor Commission. APS spokesman Robert Charles says anyone concerned about hiring practices should seek help there.

Weslie Begay, a Navajo insulator from Beclabito, New Mexico, said he heard about the contract jobs at the power plant over the radio and inquired. He didn’t hear back from one company but later got hired by another. He said he emailed the prior tribal administration asking that someone ensure Navajos are being hired for the jobs, but the only response he received simply thanked him for his thoughts.

“You see a lot more people there now, but at the same time, you’re seeing more from out of state,” Begay said. “Just after work, you’re leaving the parking lot, and you see license plates from all over — Texas and Louisiana.”

Franks petitioned the Labor Relations office to investigate and alerted the tribal president’s office. But he said his concerns and those of 15 to 20 others were dismissed. He was given the option to sue - one of several options through Labor Relations — but Frank said he doesn’t have the resources.

Efforts to sue might be futile since the Labor Commission is waiting appointment of members, and hearings through November have been rescheduled. The Labor Relations office recently was hit with $200,000 in budget cuts, leading to fewer staff members and the shutdown of at least one office.

Navajo workers and union leaders also say they’re hesitant to approach Labor Relations because it’s time-consuming, contracts often wrap up before action can be taken, or they get no response.