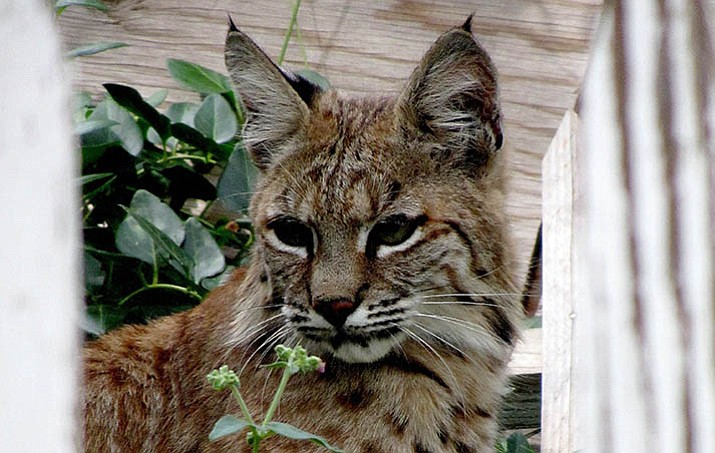 Ann Somerville took this photo this summer when the bobcat went behind a neighbor's broken-down picket fence. "It just sat there looking at me," Somerville said. (Courtesy)

The most important thing is do not turn your back and run. The animal’s instinct will be to chase you, as it thinks you are prey. You cannot outrun a mountain lion.

Stand and face the animal, and make eye contact. Stay calm and speak loudly and firmly. Raise your arms and wave slowly or open your jacket to appear larger.

Talk to your children so they won’t panic and run.

Do not leave food outside for rabbits or deer. Those animals attract the larger predators, which can pose a threat to people. Mountain lions and bobcats cannot successfully be relocated and usually are killed if found to put residents and visitors at risk.

Mountain lion sightings in The Mountain Club on the west side of Prescott are not all that uncommon. In September, one was caught on camera traveling through the residential neighborhood at about 1 a.m.

However, wild animal sightings, for the most part, turn out to be bobcats, said resident Jim Poore. This year, there were plenty of reports of two or three bobcats hanging around.

“We aren’t putting much effort anymore into tracking reported bobcat sightings; there are just too many, and they are from all over our community as well as Camp Pinerock,” Poore wrote on the Mountain Club neighbors website. “Most reports have been clustered in the south end, but we also received a report from as far north as Arroyo Drive.”

Apparently, two young bobcats about the same age appeared in the Mountain Club this summer, making themselves at home on residents’ patios and backyards. “Bobby the Bobcat” has been observed since July 25, with more than a dozen sightings, Poore said.

Arizona Game and Fish personnel advised residents to make noise or spray the bobcats with water so they will leave and find other places to go. AZGFD also warned of the dangers to small pets left outdoors.

“He’s so comfortable in our residential area now that he’d probably just go next door where the natives are friendlier,” Poore said, adding that he hadn’t heard any reports of missing pets.

Both bobcats, possibly littermates, looked healthy and well fed, probably on the plentiful little rodents in the area. “He would have a much brighter future if he would just move on to less densely-populated surroundings and lose his insouciance toward humans. Being that laid back is not a healthy survival characteristic for a bobcat,” Poore said.

Sightings have slowed down with the cooler weather. The most recent incident took place when a couple walking their golden Lab met a bobcat walking the other direction on the opposite of the roadway.

“The dog decided discretion was the better part of valor,” Poore said, as no confrontation took place.

To report a mountain lion sighting or encounter, call the nearest Arizona Game and Fish Department regional office in Flagstaff at 928-774-5045 during weekday business hours. During non-business hours, call the AZGFD radio dispatcher at 623-236-7201.