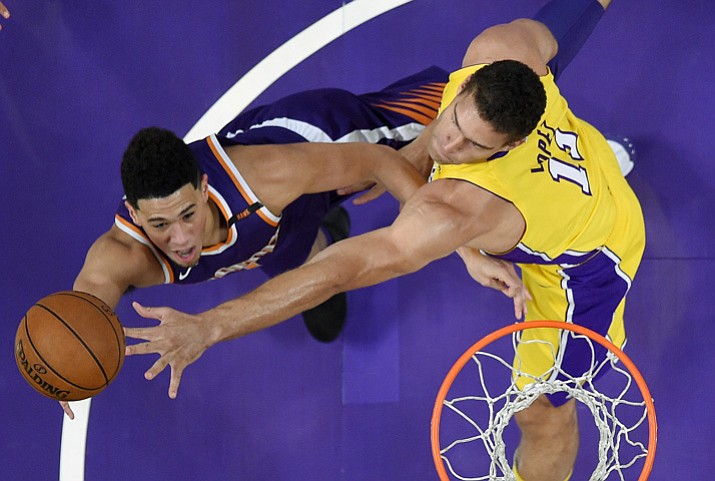 Alex Len had 17 points and 18 rebounds for the Suns, who won for just the second time in eight games. Tyler Ulis added 16 points as Phoenix bounced back impressively after giving up 142 points in a home loss to Houston one night earlier.

Rookie forward Kyle Kuzma scored 28 of his career-high 30 points in the second half for the Lakers, who have lost five of six. Los Angeles beat Phoenix 100-93 on Monday, but couldn't match that defensive effort in the rematch.

Ulis, Lakers guard Kentavious Caldwell-Pope and Suns rookie Josh Jackson all got technical fouls for an aggressive shoving match near the Phoenix bench with 3:17 to play.

Booker scored 36 points in the Suns' home loss to the Lakers on Monday, and he kept up his history of torrid performances against LA. Perhaps motivated by a verbal altercation near the Lakers' bench in Phoenix four days earlier, Booker hit all six of his 3-pointers in the first half at Staples Center.

Kuzma set a new career high for the second straight game with a dynamite second half, but the Lakers made no progress on their deficit.

Greg Monroe had six points and one rebound in his second appearance with the Suns.

One night after giving up 90 points in the first half to Houston, the Suns yielded a measly 53 first-half points to the Lakers while jumping out to a 12-point lead. Booker nailed two 3-pointers in the final 14 seconds, with Ball's first field goal on a layup sandwiched between them.

Lakers: Larry Nance Jr. has been cleared to return to practice earlier than expected. The forward broke his left hand Nov. 2 and was expected to be sidelined four to six weeks. ... Kuzma's sixth 20-point game is the most among NBA rookies.