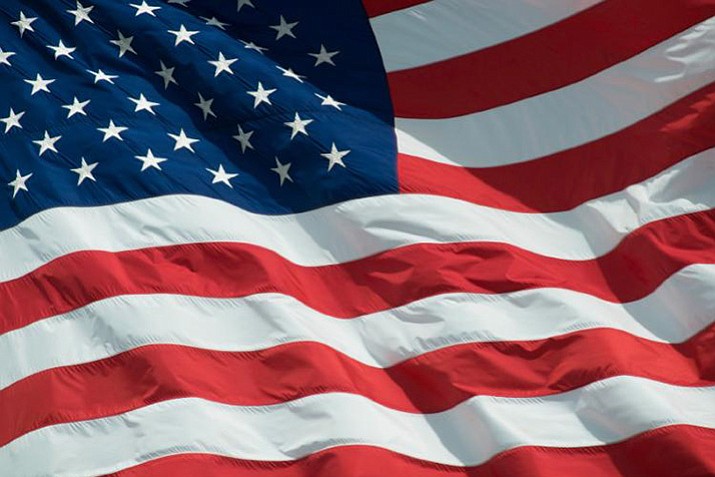 • FLAGS — Our Grand Old Flag, the Stars and Stripes of the USA, has not generated more controversy than whether to kneel or not, except when it was all the rage to burn it or wear it.

In 1989, it was the decision of the U.S. Supreme Court (Texas v. Johnson) that invalidated prohibitions on desecrating the American flag enforced in 48 of the 50 states. Currently, flag burning is not illegal. The Supreme Court in 1969 ruled that the burning of the flag is protected by the First Amendment. (However, get this, the person who burns the flag can be found guilty of a misdemeanor for starting a fire without a permit.)

Not liking it, that said, noting the National Football League remains mired in a public relations nightmare over kneeling before the flag during the National Anthem, for Veterans Day I offer the following — thanks to Prescott resident Tom Rutherford, Captain U.S. Marine Corps (Ret) and Director, Special Security, Space & Defense (Ret):

Why aren’t more American flags flying? Please display Old Glory every day! Even a small flag (10-by-5 inches) is appropriate. Remember how 9/11 produced a great outpouring of patriotism? The flag is a symbol of our freedoms, liberty, democracy, security, and pride.

National pride is something that comes from the heart, mind, and soul. One American prisoner of war in Vietnam was severely beaten by enemy guards for fashioning a makeshift American flag. Returning to his cell, he began making another flag. Our flag has been draped over caskets of those who fought for our freedoms, given to grieving family members, and continues to serve as a reminder of the ideals for which so many have given their lives in an effort to protect our beloved country.

The flag is our dearest symbol of nationality … to display it is our highest pride. To strike at it is to arouse all to defend it.

Proper flag etiquette in parades, such as tomorrow, Nov. 11, in downtown Prescott: U.S.C. 4 – The salute to the flag in a moving column (parades) should be rendered at the moment every American Flag passes. All persons – except those in uniform – should face the flag (men remove their hats), and place their right hand over their heart. Those in uniform, and veterans not in uniform, shall salute each flag as it passes.

So, controversy aside, I pray you are like me — that you feel pride, even a heavy heart, when you see Old Glory flying.

Enjoy the parade, my Pick of the Week, which starts at 11 a.m., preceded by a 10:30 ceremony in front of the Yavapai County Courthouse at the corner of Cortez and Union streets.

• SALUTE — The Prescott Noon Lions, numbering “110 men who care,” among other local Lions will be in the parade Saturday. Veterans, if able, will be asked to “Come and walk with us,” according to member Paul Chastain.

“Step into the street and let us have the crowd give you the recognition you deserve. … Get out in that street, wave at us, let us show you off to the people that you are a veteran too.”

Also, they will give flags to the first 250 veterans they see.

Thank you to all veterans, men and women, for your service to our country.

• SCAMS — They are not going away. I receive phone calls each week from residents telling of their encounters with IRS agents, jailed grandsons, utility companies (the list goes on), all being fake.

The latest came from Charlie and Carla Poole of Skull Valley.

Mr. Poole said it was a recording “from the IRS,” stating they are behind on their payments to the government and that they need to send money. Plus, they claimed “if they didn’t get the money they’d put me in jail,” he said Thursday.

These entities, folks, do not do collections via telephone. Do not give out personal information or go get or send money in any form. “It seems like it’s happening more and more nowadays,” Poole said.

• QUOTE — “I believe our flag is more than just cloth and ink. It is a universally recognized symbol that stands for liberty, and freedom. It is the history of our nation, and it’s marked by the blood of those who died defending it.” — Sen. John Thune, R-South Dakota