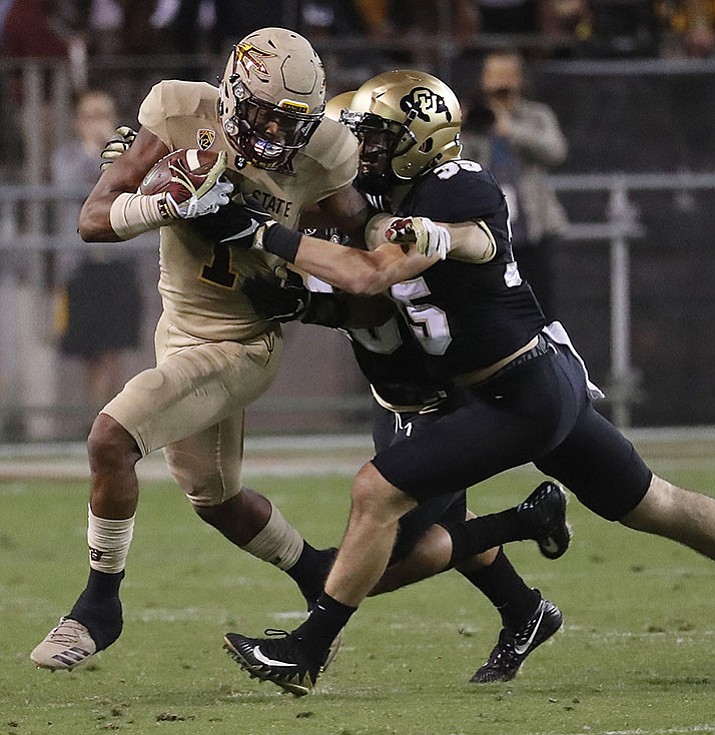 Arizona State's N'Keal Harry (1) is hit by Colorado's Beau Bisharat (35) during the first half of an NCAA college football game, Saturday, Nov. 4, 2017, in Tempe.

TEMPE — Demario Richard ran for 189 yards and a touchdown, helping Arizona State power past Colorado 41-30 Saturday night for the Sun Devils’ 600th win as a program.

Arizona State’s Manny Wilkins threw for 202 yards and a pair of scores, adding 95 yards and a touchdown rushing. The Sun Devils also kept Colorado’s Phillip Lindsay in check for most of the night, holding the nation’s third-leading rusher to 80 yards on 23 carries with two touchdowns.

Steven Montez threw for 345 yards and a touchdown, but the Buffaloes were plagued by multiple dropped passes, including one by Shay Fields that would have been a sure touchdown — he was 15 yards behind the Sun Devils — on a trick play.

Arizona State thought its defensive deficiencies were straightened out with impressive wins over Washington and Utah in consecutive weeks.

The Sun Devils regressed last week against No. 17 Southern Cal, allowing the Trojans to pile up 607 yards through a slew of big plays and missed tackles by ASU.

Now they had to stop Lindsay, the final of the nation’s top 3 rushers to face Arizona State this season.

The Sun Devils didn’t fare so well against the other two, allowing Stanford’s Bryce Love to run for 307 yards and San Diego State’s Rashaad Penny to pick up 216.

They did a good job of preventing Lindsay from breaking off any big runs in the first half, but allowed Montez to hurt them with the passing game to set up Lindsay for scoring runs of 1 and 6 yards .

Colorado took advantage of a coverage mistake late in the third quarter, going up 27-17 when Montez hit Fields in stride for a 54-yard touchdown.

Arizona State scored its first-half touchdowns on passes from Wilkins; 20 yards to N’Keal Harry and 25 yards to Kyle Williams .

Once the Sun Devils turned to their power-running game in the second half, the Buffaloes couldn’t stop them.

Richard scored on a 5-yard run set up by Khalyan Thomas’ blocked punt , then Eno Benjamin went on a 19-yard, multiple tackle-breaking run to put the Sun Devils up 34-30. Wilkins sealed it with a 1-yard run set up by Richard’s 63-yard burst up the middle.

Colorado was unable to spring holes for Lindsay on offense and was overpowered at the line of scrimmage on defense in the second half to make its climb to become bowl eligible a little steeper.

Arizona State limited the big plays on defense and restored its power-running game after being limited by USC last week.

Colorado hosts No. 17 USC next Saturday.