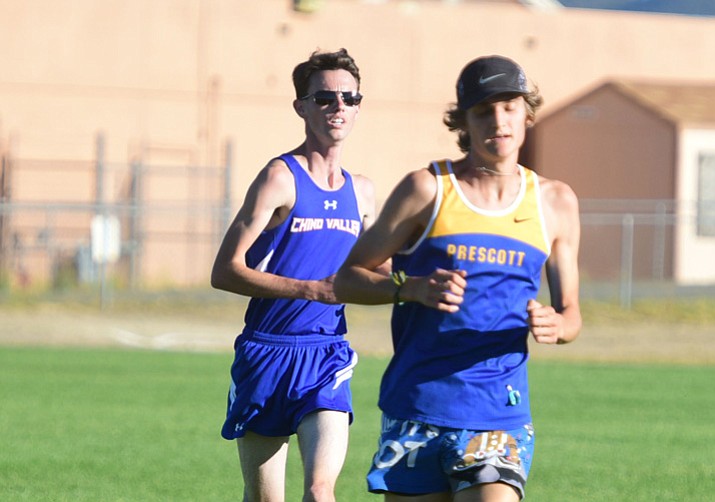 With 14 runners heading to the Division III State Championships this weekend in Phoenix, the Prescott cross-country team is ready to compete for a title.

For the boys, Matthew Bradley will lead the way for the Badgers after earning individual wins at the Peaks Invitational and the Ray Wherley Invitational this season.

The senior was an All-Section performer with a personal best 15:37 this fall, and Prescott head coach Cylinda Bray credited not just his running ability, but his team-first attitude as a big reason why the Badgers were successful this fall.

“He is a great leader for our team,” said Bray, who led the Badgers to a No. 4 ranking in the state this season.

Others joining Bradley for the Badgers include Garrett Ward, a senior medalist at four different events this season, while Matthew Fredericks, a transfer from California, posted a personal best 16:59 this year.

Alec Almenderez, Wyatt Bray, Zachary Zertuche and Jack Northrup will also join the team at the Division II State Championships, which are scheduled to be held Saturday, Nov. 4, at the Cave Creek Golf Course.

For the girls, Makenna Bray leads the Badgers into Saturday with an 18:55 personal best time this fall, having finished second at the Ray Wherley, along with Top 10 finishes in three other races.

Castro and McMahon were named to the All-Section team this fall, while Evans, a senior, is wrapping up her four-year career with the Badgers looking to surpass her personal best 20:36.

Samantha Doyle, a freshman this season, was originally part of the seven-member team heading to state this weekend, but due to a knee injury she was replaced by Townsend, Bray said.

Zea was a medalist at this year’s Division II Section II Championships, placing 14th overall with a 20:53 time. Her personal best of 20:35 came at the Twilight Invitational earlier this fall.

Badgers: The Division III State Championships are set for Saturday at the Cave Creek Golf Course at 9:45 a.m.

Bears: The Division II State Championships will take place at the Cave Creek Golf Course on Saturday with a 9:20 a.m. official start time.

Brian M. Bergner Jr. is sports editor for The Daily Courier, the Prescott Valley Tribune and the Chino Valley Review. Follow him on Twitter at @SportsWriter52 or on Facebook at @SportsAboveTheFold. Email bbergner@prescottaz.com or call 928-445-3333, ext. 1106.