Council to move ahead on Deep Well
Development agreement will get public airing, says city attorney 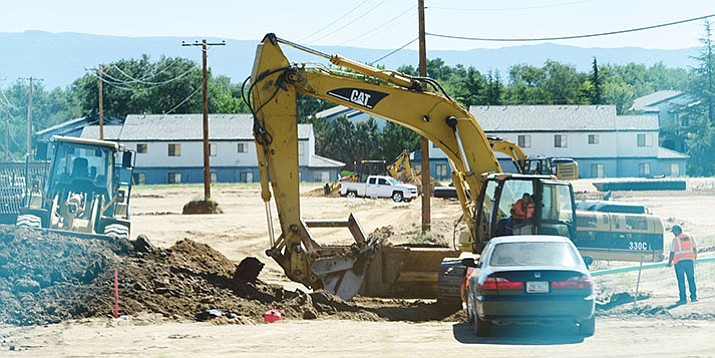 Crews work on the infrastructure where the future Deep Well Ranch subdivision is planned to be centered. (Les Stukenberg/Courier) 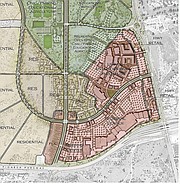 Despite a looming change of leadership in late November, consideration of the Deep Well Ranch master plan will move ahead under the current Prescott City Council.

Maintaining that the council has a duty to move forward with its review of plans for the 1,800-acre project, Prescott Mayor Harry Oberg pushed for continuing the discussion in the coming weeks.

As the two-hour study session wrapped up on Tuesday, Oct. 31, City Manager Michael Lamar asked, “Does this body want to continue to work on this?”

Oberg responded: “I think we have a duty to continue to work on it.”

Still, the mayor acknowledged that the council might not finish its review before new council members are sworn into office on Nov. 28. In the meantime, he said the candidates (and ultimately, the council members-elect) could attend the meetings to stay informed on the issues.

Earlier in the meeting, Councilman Greg Lazzell, who withdrew from the race for another term, pointed out that the Nov. 7 general election could result in the election of as many as four new members.

“My question to staff and council is ‘do we foresee a decision (on the Deep Well project) with this current City Council?’” Lazzell asked.

Ultimately, the council agreed to move forward, and instructed city staff to schedule another special study session for 1 p.m. Tuesday, Nov. 7, to discuss water allocations for the northeast-Prescott project.

This week’s discussion focused largely on background on the project, as well the actions of the Prescott Planning and Zoning Commission, which recommended approval by a 4-3 vote after conducting seven meetings from August to October.

One of the points of debate was the commission’s recommendation that the council negotiate a 50-percent reduction in the 10,500 homes (to 5,250 homes) that developers plan for the project.

Council members asked about the rationale for the 50-percent reduction, and whether it was an “arbitrary” number.

“The Planning Commission felt (the 10,500) number was too high for a number of reasons,” Planning Manager George Worley told the council, noting that commissioners cited inconsistency with past Prescott development trends as one of the reasons.

That prompted City Attorney Jon Paladini to caution the council about “arbitrary” moves that are not based on sound reasoning.

“The courts don’t look kindly on arbitrary government decisions,” Paladini said, maintaining that the city “better have a darn good reason and not be arbitrary.”

A number of residents lined up to speak, with questions and comments ranging from the project’s water allocations to the still-pending development agreement that will set out many of the details on the project, such as who pays for needed improvements.

Resident Charles Queen pressed Paladini about the public process for the development agreement.

After the meeting, Paladini said the agreement between the city and the developers is still being discussed. He added that a draft document could be ready for an executive-session discussion by the council by the Nov. 7 meeting.

That closed-door meeting would be necessary to allow the council to give direction on what should be included in the document, Paladini said. After that, he said the legal department would go back to the developers to continue the negotiations.

“Once there is a meeting of the minds between the council and the developer, (the agreement) will be publicized” and discussed in a public meeting, Paladini said.

The council also heard from two local attorneys who represent the Deep Well Ranch landowners, the James family, and its foundation.

Attorney Sal Lutey told the council that original owners Harold and Mitzi James moved to the area in the 1950s. They were approached by the city in the 1960s for a waterline easement, which they granted in exchange for water rights for the property, he said.

Later, the city approached the James family about the possibility of annexing a portion of the ranchland into city limits, and a pre-annexation agreement was approved. Lutey said that agreement granted the Deep Well Ranch 900 acre-feet of water, and an additional 900 acre-feet from the pending Big Chino Water Ranch – if and when the pipeline from Paulden is constructed.

Attorney Robert Pecharich noted that he represents the James Family Trust, which has for years given money to charitable and educational causes.

Pecharich pointed out that the entire Deep Well Ranch consists of 18,000 acres, of which the development under consideration would take up 1,800 acres.

The remaining 16,200 acres would remain as a ranch, Pecharich said. The proceeds from the development would go toward the foundation’s continued charitable causes, as well as to sustain the ranch operations on the remaining acreage.

“The only way it makes sense to continue the 16,200 acres as a ranch is to find a way to develop 10 percent (of the ranch’s land),” Pecharich said, maintaining that the proposal before the council was an attempt to plan a “meaningful development,” instead of “piecemeal subdivisions.”

The attorneys emphasized that the property’s existing zoning would allow for considerably more homes than the proposed 10,500. Worley estimated that total number at 14,329 homes, while developers have estimated the cap at more than 15,000.

Lamar told the council that a central issue for the council members will be to decide whether they favor the existing zoning or the master plan proposal.

Throughout their months of discussion, Planning and Zoning Commissioners had a number of concerns about the master plan, and, along with the recommendation for fewer homes, included 20 additional conditions for approval. Worley said some of those conditions have already been incorporated in to the plan.