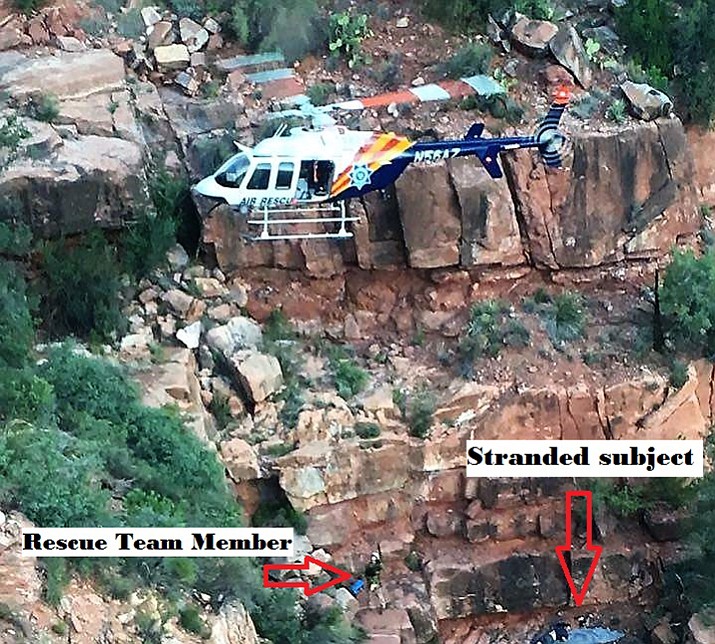 A Phoenix man who went on a day hike in Sycamore Canyon on Saturday, May 13, ended up in serious trouble when he became “stranded in a very precarious position on a small ledge,” said Dwight D’Evelyn, spokesman for the Yavapai County Sheriff’s Office.

The YCSO was called to start a search for the 34-year-old man at about 8 p.m. Saturday night after he failed to return home and couldn’t be contacted by cell phone.

A ping of his phone provided very rough information, and ground searchers from the YCSO and Verde Search and Rescue Team began to look for the victim along with a Department of Public Safety Ranger helicopter.

About 1 a.m., D’Evelyn said, the aircrew spotted the man on the ledge.

“He waved his arm to indicate he was alive, but appeared unable to stand,” D’Evelyn said.

There was no place nearby to land the helicopter and a rope rescue was too dangerous in the dark, so the Ranger crew dropped a bag of supplies and a radio down to him, but the victim was unable to disconnect the bag, so a member of the aircrew cut the bag loose.

They told him they would be back at dawn to get him off the ledge.

At 5:30 a.m. Sunday, the helicopter took two YCSO Back Country technicians to the scene and a second helicopter stood by to transport the victim to the hospital.

“Rescue crews learned he had fallen and suffered a back injury and possibly broken both wrists,” D’Evelyn said, and the Back Country crew secured him to a backboard before airlifting him by rope line down to the second helicopter.

The man was at Flagstaff Medical Center by 7 a.m., where he told deputies he had fallen drop a steep drop around 1 p.m. Saturday and was unable to move.

He survived the night with the help of the supplies dropped to him by the helicopter.

“Hiking along in these rugged wilderness areas is simply dangerous and could cost you your life,” D’Evelyn said, noting that the man’s survival was likely due to the fact that he’d left family members with information on where he was going and when he’d be back.