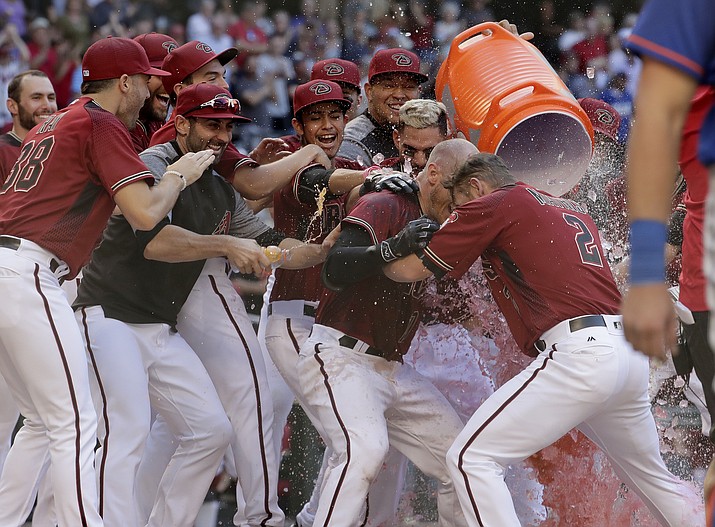 Arizona Diamondbacks Chris Herrmann, center, celebrates his walk-off home run during the 11th inning of a baseball game against the New York Mets on Wednesday, May 17, 2017, in Phoenix. The Diamondbacks won 5-4. (Matt York/AP)

PHOENIX — Chris Herrmann homered off Rafael Montero leading off the 11th inning, giving the Arizona Diamondbacks a 5-4 victory on Wednesday and sending the New York Mets to their season-high seventh straight loss.

Montero (0-3) relieved to start the 11th, and Herrmann worked the count full, fouled off a pitch and connected on a belt-high fastball for his first game-ending home run in the major leagues.

New York went 0-6 in Milwaukee and Arizona, the Mets’ longest winless trip since 1999, according to the Elias Sports Bureau. At 16-23, New York dropped seven games under .500 for the first time September 2014.

Tom Wilhelmsen (1-1) walked Matt Reynolds and Lucas Duda with two outs in the 11th before throwing a called third strike past Jose Reyes.

Making his second start since a three-day suspension for failing to show up for a game, Matt Harvey allowed three runs, six hits and four walks in 5 1/3 innings, leaving with a 4-3 lead.

Jake Lamb’s two-run homer in the third was the 11th home run in eight starts this season off Harvey, whose fastball reached 98 mph.

After giving up an RBI double to Paul Goldschmidt, Harvey struck out the Arizona slugger twice.

Mets starters have gone 17 consecutive games without getting an out in the seventh inning, tying the club high set in 2002.

Michael Conforto and Juan Lagares homered for the Mets, who led 4-3 before Yasmany Tomas’s RBI double in the seventh off Robert Gsellman, whose turn is being skipped in the rotation because of an off day.

Mets: LHP Steven Matz was to make his first rehab appearance Thursday night for Class A St. Lucie. Matz has been on the DL all season with left elbow inflammation.

Diamondbacks: RF David Peralta was out of the starting lineup for the third straight game with right glute tightness but pinch hit for Corbin in the sixth and grounded into a forceout.