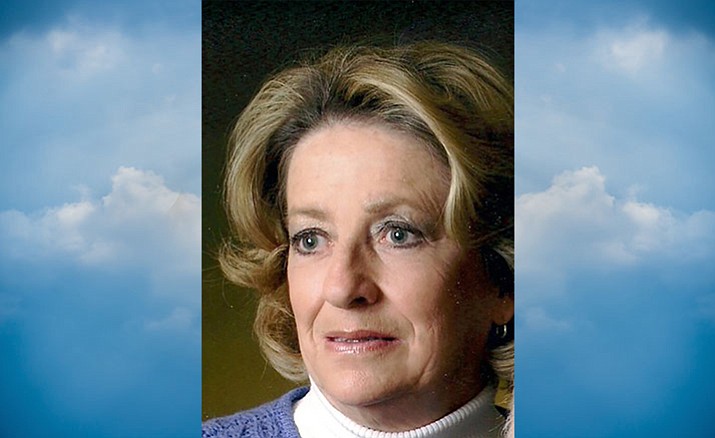 Janice Hume, whose wit, glamour and ambition carried her from the coal-mining region of West Virginia into the Air Force and onto assignments with her husband around the world, died peacefully at her Prescott home before dawn Saturday, April 8, 2017. She was 74.

Called “Jenny” by her family, Mrs. Hume began to show organizational skills as a little girl, talents that would serve her later as a nurse and Air Force officer. Lessons came from her multi-generation Appalachian grandparents, stern Mary Elizabeth “Maw Maw” Hughes and burly grandfather Thomas Henry “Paw Paw” Hughes. In the mining town of Goodwill, she learned how to take care of her younger siblings, Marshall, Darrell, Debra and later Elizabeth “Diane,” and how to give and accept love from the warmth of the large family that enveloped her.

In style and substance, Mrs. Hume was a product of her times. She epitomized a 1950’s teenager, a cheerleader, poodle skirts and bottle blond hair. She had enormous green eyes and an expressive mouth that continued to reveal pouts until her final days.

Her mother worked hard to help support the family, but her greatest legacy to young Jenny was teaching her the manners, bearing and dignity that would allow Mrs. Hume to cross cultural and socioeconomic barriers.

After graduating from Bramwell High School at age 17, Mrs. Hume left her childhood behind at the Jefferson Hospital School of Nursing in Roanoke, Virginia. Upon graduation in 1963, she joined the Air Force, beginning a life long love affair with the military and the red, white and blue of patriotism.

She started her new life as a Second Lieutenant stationed in Alamogordo, New Mexico, having replaced Jenny with the more sophisticated name Jan. There she first glimpsed her future husband at a poolside party. He was handsome, smart and sure of himself. She knew little of the world, but did own a snazzy black and white Mustang, which impressed the young lieutenant. He began by teaching her how to cook. Soon, he promised to provide for her for the rest of their lives.

“We talked and talked and talked some more,” she recalled to her daughter, Elizabeth Hume Graswich, days before she died. Talking was the secret to a successful marriage, Mrs. Hume said. The couple looked forward to celebrating their 50th anniversary this August.

Jan and Ed were married in an Episcopal wedding on base and she smoothly embraced her husband’s church and politics, another secret of matrimonial success. Nine months after their marriage, now a Captain, Mrs. Hume resigned her commission rather than accept duty tours apart from her husband. Posted to England, they adopted local customs, from tea to curry, hitting all the hit shows at London and Windsor theaters.

With crinolines out of fashion, Mrs. Hume adapted and became the image of the fashionable late ‘60s woman. Leaving the folds of cloth behind, she took the fashion model Twiggy as her idol with their look-alike skinny legs and knobby knees. She was beautiful.

In the 1970s, during their first tour at the Air Force Academy in Colorado Springs, their fifth anniversary gift to one another was an adopted baby boy, Matthew Ross Hume. Two years later, they welcomed another baby, Elizabeth Anne Hume, into their home, months before heading to Ann Arbor, Michigan, where her husband received his Master of Laws degree.

Mrs. Hume created a rich and fulfilling life with her husband and children, filled with friends, parties, devotion to church and each other. The little coal-mining girl with blond ringlets carried her family across the globe but found stability in cooking and baking. She created special cookies for her children, each batch measured to perfection. As her children grew, she let them go with love and hope of joy. She left the world before the sun rose on a Saturday morning in a manner that would have satisfied her final ambitions, in peace, next to her husband. Her last words to her daughter expressed happiness about her childhood, her marriage, her children and her faith in future generations.