Editorial: Hazing is going to kill the Greek system on campuses 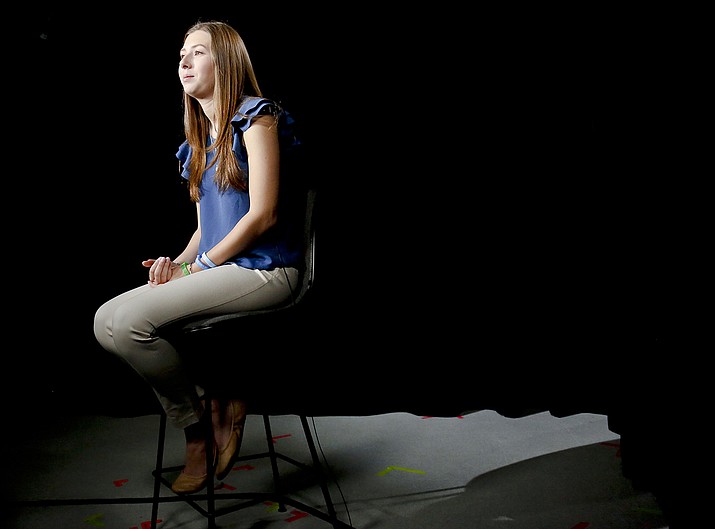 Kaitlyn Tempalsky, 20, a college sophomore speaks about her boyfriend Timothy Piazza during a May 15 interview in New York. Piazza, 19, a Penn State sophomore died in February after he was put through a hazing ritual at his fraternity house and forced to drink dangerous amounts of alcohol in a short amount of time. (AP Photo/Bebeto Matthews)

On Feb. 2 of this year, 19-year-old Tim Piazza — a sophomore at Penn State University — was undergoing a ritual with its roots in the Middle Ages, hazing at the Beta Theta Pi house. He was forced to drink, a lot. Refusing to participate in hazing activities would impact his score, which might mean he would not be accepted into the house.

So he drank. His blood alcohol was .4. That is five times the legal limit to drive in Arizona. He was so drunk he fell down the stairs, repeatedly. To keep him from puking all that alcohol up, his potential frat brothers put a bunch of text books on his chest.

After he fell to the floor with a punctured lung and a ruptured spleen, the frat boys stepped over him. At one point, a junior suggested they call for help. That junior was physically assaulted for his moment of compassion.

When it became obvious something was seriously wrong, the frat brothers began getting their stories straight on what they would tell authorities. Piazza was still alive, but dying while they discussed it and then deleted the text messages they sent to one another.

About 12 hours after Piazza first fell, a senior finally called 911 to get him help. Authorities said that his injuries were not initially life threatening, if they had been treated immediately. They were not.

According to the University of Maryland’s Stop Hazing website, there has been at least one death because of hazing on a college campus every year since 1970. That’s a 47-year streak that’s still active.

The greatest Mother’s Day gift would be ensuring their children don’t die in their prime because of stupidity and senseless acts.

Every year when the streak continues, the editorials begin calling for an end to the Greek system on campuses.

Last week, University of Arizona officials kicked the Alpha Sigma Phi fraternity off campus after a student was injured during a hazing ritual.

The leaders of the fraternity had reportedly threatened potential witnesses if anyone told the truth about an assault that sent one young man to “long-term” hospitalization.

But give them credit, they at least got him help instead of just stepping over his body while he died. The good that fraternities offer is often overshadowed by the hazing. In general, students in fraternities have higher GPAs and lower dropout rates. For students leaving home for the first time, they provide a place to belong and new friends to overcome loneliness and depression.

Connections made in fraternities can help someone for life. And, after calls for them to be more open, most fraternities today have diverse memberships.

But all of that is at risk by the hazing, which has spread to some high school campuses where they have even less good judgment and those acts have made headlines.

Eighteen young men have been charged with manslaughter in the death of Piazza. More tragedy, and for what?

The only ones who can save the Greek system are the frat boys themselves. They need to get the hazing under control, and if we can’t go at least one year without a hazing death, then the Greek system should end.