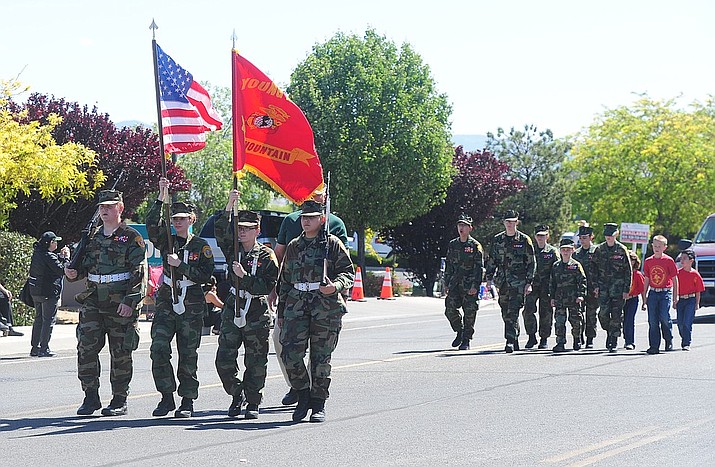 Coinciding with Salute to Heroes this weekend is Prescott Valley Days, from Thursday, May 11 through Sunday, May 14 in the Prescott Valley Entertainment District. The parade starts at 9 a.m., Saturday, followed by a pancake breakfast at 10:30 a.m.

Though he’s only been an officer of the Prescott Valley Police Department for five months, Officer Matt Wilson is already saving lives, having received a lifesaving award for CPR efforts. Wilson was awarded at the Prescott Valley Town Council meeting on Thursday, April 27 for actions performed on Sunday, Jan. 1.

“I responded to a house here in town, the mother was attempting CPR on her son. I went in and took over CPR for her. When I first went up the individual, he had no breath, no pulse … I did get a breath and a pulse back after my initial CPR attempt, but then both of those failed again,” he said, commenting he restarted the efforts a second time. “I maintained that until the fire department came on scene and they took over my efforts at that time.”

The man ended up surviving, Wilson said, mentioning he doesn’t see himself as a hero, rather just a police officer doing his job. While he didn’t know what to expect in his first few weeks as an officer for Prescott Valley, Wilson said he’s just willing to go out there and try to help those who need it.

The community is set to recognize the efforts of first responders, such as Wilson, at the seventh annual Salute to Heroes event, from 10:30 a.m. to 3 p.m. on Saturday, May 13 in the Prescott Valley Event Center parking lot, 3201 N. Main Street. Inside the Event Center is the Salute to Heroes Stair Climb that starts at 11 a.m. with registration at 10 a.m. followed by the Bigfoot Monster Truck Show at 3 p.m. There will be a monster truck display at Sun Valley Tires, 8337 E. Highway 69 in Prescott Valley on Friday, May 12.

Outside will feature exhibitions by police, fire, SWAT, EMS and K9 as well as Guidance Aviation Helicopter rides.

“It’s a good thing,” Wilson said of Salute to Heroes. “Our town comes together and supports the people who are out trying to do the best they can. It’s a very good cause.”

The exhibitions outside in the Event Center parking lot are free and the Bigfoot Monster Truck Show is $20 for adults and $8 for kids under 11. Tickets are available online at www.prescottvalleyeventcenter.com or by calling the box office at 800-745-3000.

Those interested in participating in the stair climb can register online at this link. Proceeds benefit the Central Arizona Honor Guard.

“We moved it to April and the reason we did was because of the carnival, carnival being the cornerstone of Prescott Valley Days, we needed to work with a carnival that could get us on our schedule,” Uhl said, noting that though there was a carnival last year, it was smaller than carnivals in past years. “When we started last year, we said we needed a better, bigger carnival … working with Sun Valley Rides, we had to work with their schedule and still try to keep it before school ended. So that came the second weekend in May.”

There’s now a long term arrangement with the carnival and so the plan is to continue to keep Prescott Valley Days in May, Uhl said.

The parade is at 9 a.m., Saturday, followed by a pancake breakfast at 10:30 a.m. with the open air vendors continuing to sell at 11 a.m. Saturday includes a barbecue from 5 to 7:30 p.m. with live music by Danny Romero & the Arizona Territory Band at 6 p.m. and a second Matchstick Rush Fire Show at 9 p.m.