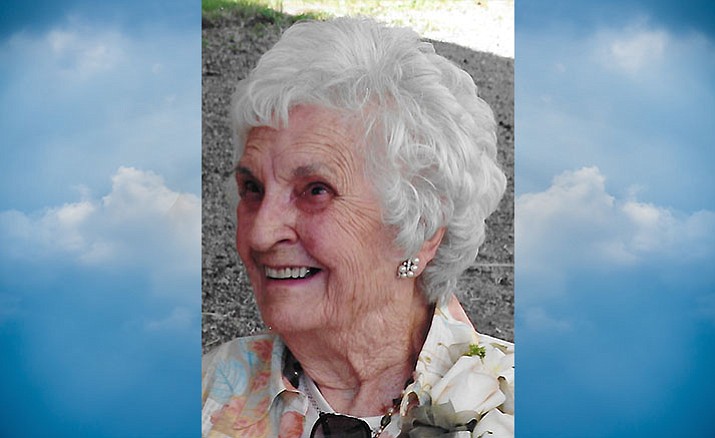 Born Mary Kathryn Best in Lerna, Illinois, she moved to Glendale, Arizona at age 9 with her parents. She attended Glendale schools, where she would meet her future husband Gordon Thowson. She graduated from Glendale High School in 1938, and until the last 2 years enjoyed the yearly class reunions for the “Class of 38”.

Katie and Gordon were married in 1940, lived and worked in the Phoenix area until WWII sent them to California.

She returned to Arizona to wait out the war, and had the first of three children. After the war, she had two more children, while assisting her husband in his businesses.

The family moved to Prescott in the late 50’s. She was still active in the family business, volunteered at church, schools, and community. She remained a volunteer for many causes until

almost 90. She was still making and donating knitted booties to the Community Pregnancy Center until she reached her goal of 1000 pairs. She is well known for her lovely knitted and crocheted afghans, baby blankets, sweaters, scarves and booties. In her final years, living at Alta Vista, she made many friends and had so much fun playing just about any card game or board game that she could. She loved Bingo, and attending Bible Study.

She was preceded in death by her husband, Gordon, in 1998. She is survived by sons Mike Thowson (Gwen), Greg Thowson (Lynda), daughter Sherrill Olsen (Mike), Merle Crow (Doug); eleven grandchildren and 21 great-grandchildren. She loved her family, and was active and interested in every one of them. She will be greatly missed.

Katie loved her Lord and Savior, and lived her live accordingly. She will be remembered as a kind, gracious, loving, Christian woman by all who knew her. A family celebration of her life will be held at a later date.