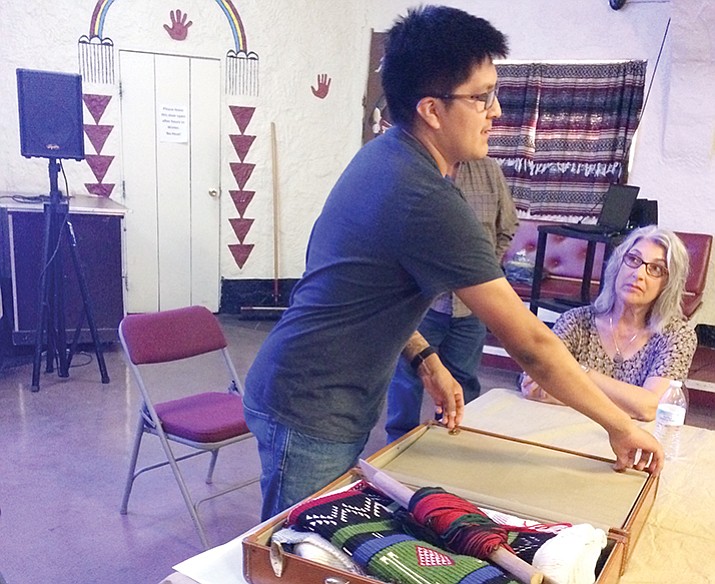 Lance Dawavendewa opens up a suitcase of his weaving and handmade tools at the Prescott Unified School District Native American Families Night at the Smoki Museum last week. (Nanci Hutson/Courier)

Lance Dawavendewa of Prescott Valley is a Hopi tribe artist who has perfected the ancient talent of weaving threads into cloth masterpieces on a loom, be it for table decoration, wall hangings, scarves and other such uses.

He, too, has crafted his own tools, including the sculpting of his own arrows. And he grows his own food.

“I weave to keep the custom alive,” said Dawavendewa who has roots in several Native American Arizona tribes. “It’s a dying art, and we can do something to revive it.”

Part of that will be an exhibit of his works and a demonstration he will do during the upcoming Journeys of the Spirt art exhibit at the Tis’ Gallery in downtown Prescott between May 18 and June 20, with an opening reception scheduled for May 26 from 5 p.m. to 8 p.m.

Like some of the other Native Americans who attended, Lance is passionate about trying to engage Native American students in cultural activities that will help keep them connected to their family roots. Professional Native American artist Filmer Kewanyama introduced Dawavendewa as an example of what people are doing in the community.

In the Tis’ exhibit, Kewanyama said he will be introducing some of his own sculptures, and as this is a new medium to him, he said he is eager to instruct those who might wish to explore it together.

Smoki Museum Assistant Director Manuel Lucero offered a presentation to the attending families – about a half dozen – related to the preparations for the September “Prescott Pow Wow,” a major event of crafts, dance, music, and food that is all about promoting Native American culture and pageantry able to be enjoyed by all community members.

One little boy said he was interested in learning how to make a bow and arrow.

Lucero said he is in luck.

“My father is a traditional bow maker,” Lucero said, noting this area is rich in connections to Native Americans willing to share all sorts of

Granite Mountain sixth-grader Luke Vervoorn joined the Pow Wow three years ago. As a “grass” dancer, Luke said he finds the festival to be a “very cool” way to celebrate his Native American heritage.

The district currently has identified about 50 Native American students, but district Grants Director Paul Katan said he and his staff know there are likely at least 100 more students who have not come forward and they want to provide outreach so those students and families can get access to the various programs the district has to offer them.

In the greater Prescott community, Mattox noted there are a multitude of resources, and individuals, eager to share their stories, art and beliefs with area youth so as to continue traditions that are so much a part of Arizona’s history.

“Getting parents engaged is our goal,” Mattox said. “We have a lot we can do, and we’d love to do it.”