Tommy Meredith has sold Jersey Lilly Saloon after about 15 years of ownership.

The new owners, Susan Roberts, her son Josh Makrauer and their friend Andre Defreitas, officially took over the business on Friday, May 5, and intend to continue business as usual without any sort of temporary closure.

Makrauer said they are planning a grand opening event to celebrate the change of hands in the near future. An exact date is yet to be determined. 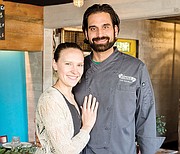 John Panza and Cassandra Hankison, the owners of SENSES LLC, a pop-up dinners and in-home dining experience company, have expanded their business by taking ownership of BiGA, a quaint restaurant in Prescott.

Their restaurant, BiGA by SENSES, at 623 Miller Valley Road, opened on Tuesday, May 2, with service Tuesdays through Saturdays from 11 a.m. to 9 p.m. and Sundays 5 to 7:30 p.m. On the last Sunday of each month SENSES will offer a Farm-to-Fork Family Supper from 5 to 8 p.m.

The menu showcases a modern take on American classics, according to a news release.

Annie Woodruff and Kristin Cree opened and operated BiGA for about three years before passing it on to Panza and Hankison.

Curious about learning to home brew? The Whiskey Row Brew Club is hosting a brew day today, Sunday, May 7, from 11 a.m. to 6 p.m. at Granite Mountain Brewing, 123 N. Cortez St., in Prescott.

The Whiskey Row Brew Club is hosting a brew day at Granite Mountain Brewing in Prescott on Sunday, May 7. (Courtesy Photo)

The event will feature demos of extract kits, single pot brewing and all-grain systems. Granite Mountain Brewing will be offering up special taps and discounts, plus DJ LaRue from 2 to 5 p.m. The party will be on the patio.

After introducing major appliances to 500 JCPenney stores last year, the company has expanded the new venture to many of its other stores, including the one at the Prescott Gateway Mall, 3200 Gateway Blvd.

The location has renovated its home department to accommodate a 1,000 square foot major appliance showroom featuring refrigerators, ranges, dishwashers, washers and dryers. The showroom officially opened on Friday, May 5.

The JCPenney store in Prescott is one of 100 locations nationwide that will be receiving a major appliance department this year.