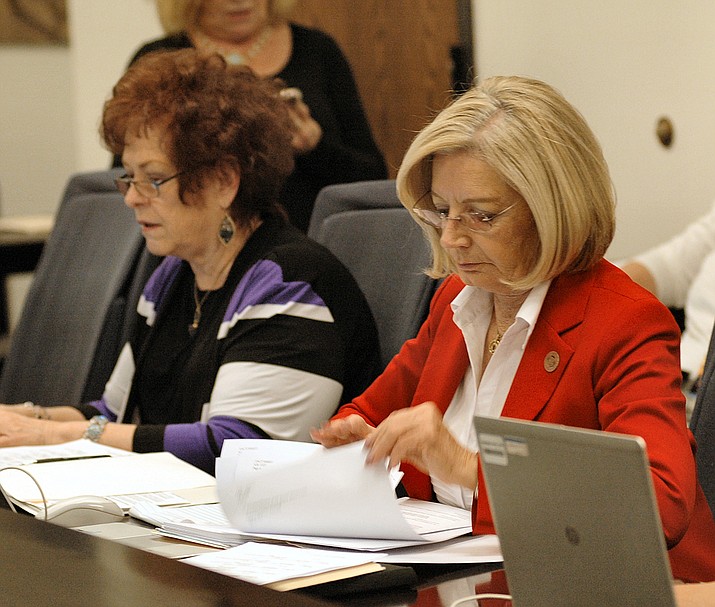 House Speaker J.D. Mesnard made enough deals with hesitant Republicans to get the necessary 31 votes in his 35-member caucus to adopt the $9.8 billion spending plan. None of the Democrats in the 60-member House supported the package.

Potentially more significant, those deals also bought Mesnard the votes he needed to approve the proposal by Gov. Doug Ducey to allow state universities to borrow up to $1 billion for 25 years. That includes a promise to the schools the state would provide the money as needed for repayment.

One of those is a change in laws about when cities can have their elections.

The Senate gave its own approval to the budget along strictly party lines. And after some coaxing the Senate finally gave its blessing to that university borrowing plan, with even some Democrats agreeing to go along.

The fear earlier in the day that the university bonding package could fail had Eileen Klein, president of the Arizona Board of Regents, gently reminding lawmakers of their constitutional obligation to raise the funds to “insure the proper maintenance of all state educational institutions’’ and to “provide for their development and improvement.’’ And the legal option for that, she said, is through the courts.

“We’ve chosen to take another route because we think we should be partnering with the state to address these critical issues,’’ Klein said, meaning the bonding plan. But she said that at some point the universities cannot deal with nearly $700 million in repair needs without help.

“We’re doing everything we can,’’ she continued. “But we can’t be diverting a bunch of money, particularly tuition money to educate students to keep up with the building maintenance that the state’s supposed to be paying for.’’

Sen. Steve Farley, D-Tucson, criticized Republican leaders for making what he said are often-expensive deals to line up votes in their own caucus for the university bonding package.

Farley pointed out the budget deal decreases by $100 the amount that Arizona residents have to declare in computing their state income taxes. That provision, which will save the richest taxpayers just $4.54 a year, reduces state revenues by $10 million.

But Farley said that for just $1.4 million the legislature could have fully restored a state welfare program, one of the Democrats’ priorities.

Republicans also added $1 million for each the University of Arizona and Arizona State University to expand funding for so-called “economic freedom schools’’ which were set up with seed money from foundations run by the Koch brothers. The schools already are getting $5 million in ongoing cash, first approved last year.

“The governor would rather give more money to Koch brothers’ schools than to teacher raises,’’ complained Farley who supports a 4 percent hike versus the 2 percent, two-year increase in the budget.

It wasn’t just major issues that slowed progress Thursday on enacting the budget. Individual lawmakers had their own complaints.

For example, Sen. Warren Petersen, R-Gilbert, is miffed about language which would have the state insert itself into a dispute between Marana and Pima County.

Originally located in an unincorporated area, county officials gave the requisite go-ahead. But they also said the developers needed to set aside some land elsewhere to remain vacant to mitigate the effects of the project on the environment.

Only thing is, that property is within Marana. So city officials got Rep. Vince Leach, R-Tucson, to sponsor legislation to prohibit that deal unless Marana gives its OK.

Petersen said this is strictly a local matter and the state should butt out. And he said what happens to that bill affects his vote on the budget.

Yet other delays to final approval actually surround issues where both Republicans and Democrats agree.

Rep. Kristen Engel, D-Tucson, said one reason the state spends so much money on incarceration is that some laws make no difference between violent and nonviolent offenders.

She specifically cited one statute which says inmates earn one day of release credit for every six days served. She proposed leaving that in place for those convinced of serious or violent offenses but said other inmates should be able to earn a day off their sentence for every three days of good behavior.

Rep. David Stringer, R-Prescott, said Engle is on the right track. He said it’s time to “stop incarcerating, at great cost to our taxpayers, people who are not a threat to public safety.’’

But Stringer said, though, he could not support Engle’s effort to put that language into the budget package because it wasn’t part of the final deal approved by legislative leadership. But he promised to work with her next session.

There also was grumbling by some Republicans about the fact the budget deal allows the state to once again divert $30 million from gasoline taxes and vehicle registration fees to instead fund the Department of Public Safety.

Rep. Noel Campbell, R-Prescott, pointed out state law limits such transfers to $10 million. But rather than address -- and debate -- that law, legislative leaders simply inserted a provision in the budget saying that law can be ignored for yet another year.

“We have the ability to stop that withdrawal,’’ Campbell complained, saying the road needs of the state are too great to allow this practice to continue.