Spiders, scorpions and centipedes
Bites and stings — how to avoid and what to do 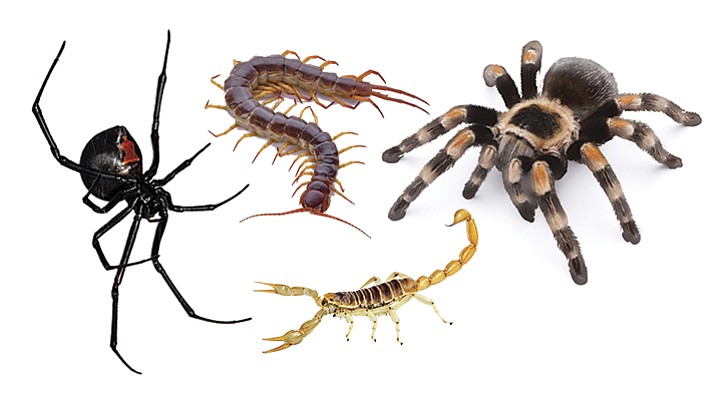 If bitten or stung:

Clean the area with soap and water, apply ice to slow the spread of venom. Seek medical treatment immediately if bitten by a black widow or brown recluse spider.

Important advice to avoid bites and stings: Never put your hands or fingers into or under an object you haven’t checked. Shake out boots and gloves before using.

All three of these creepy crawlers eat unwanted insects – in fact, they may even eat each other. But who wants black widow spiders, scorpions or centipedes inside the home?

The bites or stings can be painful — or life-threatening in rare cases.

Let’s start with the arachnids. The most venomous spiders in the Quad-city area are the black widow and the brown recluse. The hairy wolf spider might be the ugliest, but its bite is not venomous.

The female black widow – so named because they can eat their mate – is recognized by its shiny black round shape and the red/orange hourglass on its abdomen. The males are not venomous.

Their webs are strongly built, but disorderly in appearance. They are nocturnal, hiding during the day in dark protected areas like under ledges, in corners of attics and sheds, and in woodpiles. While they are not aggressive, they will bite if accidentally disturbed or to protect their egg sacs.

Some people may not realize they have been bitten; others may feel immediate pain, burning, swelling and redness. Symptoms can include muscle aches, abdominal pain, breathing difficulties, excessive sweating and nausea. Black widow bites are hardly ever fatal.

The brown recluse spider is recognized by a dark violin-shaped mark on its back. It, too, likes woodpiles, tree stumps, unused cupboards, and space behind dressers and bookshelves.

Its bite produces a mild stinging and redness followed by severe pain within eight hours or so. There may be fever, chills and body aches. Most of the time, the bite heals in about week. Sometimes, however, a blister forms surrounded by a blue or purple area, which can evolve into a deep ulcer.

Mayoclinic.org recommends seeking prompt medical care if you suspect the bite is from a poisonous spider. If possible, capture the spider in a glass jar or container to bring with you.

Dave Coons, Pest Guard Pest & Termite, a local business, said as the weather changes, spiders and other insects are out and about looking for food and new areas to build homes.

“Humans and domestic pets all have different reactions from these bites,” Coons said, “and it is advised to call poison control to describe symptoms or go to your local emergency room for treatment.”

Scorpions have eight legs, lobster-like pinchers, and a tail that curves upward. Several species live in this area, but the most poisonous — the small, nearly transparent, bark scorpion — exists a little further south of Prescott, Coons said. They sting rather than bite, and are rarely fatal unless a person has a severe allergic reaction.

Also nocturnal, scorpions can be located in the dark by using an ultraviolet light (black light) where they glow a neon blue.

Most stings produce numbness and tingling around the site. The effects of venom in small children and the elderly may include difficulty breathing, muscle twitching and unusual head and eye movements, drooling, nausea, vomiting and inconsolable crying, the Mayoclinic.org site states.

Centipedes are arthropods, which also includes insects, spiders, and crustaceans, explains Jeff Schalau, with the University of Arizona Cooperative Extension.

“They are not harmful to food, clothes, furniture, or other items within homes, although their presence can be unnerving,” he said his Backyard Gardener column.

Centipedes are beneficial, predatory members of local ecosystems, and can rid a household of termites, roaches and spiders. They like damp places, under sinks, and also in storage spaces, bedding and clothing.

“Because they eat many common pests, centipedes are considered beneficial when outdoors,” Schalau said.

Each body segment joins the next. On the first segment behind the head, the centipede has hollow tubes, with openings at their sharpened tips that function as fangs, which are attached to venom glands, and are used to kill prey.

The bite, while rare, is considered about as serious as a bee sting. Redness, swelling and itching may last several hours to several days.

To rid your home of all three of these pests, keep the home dusted and vacuumed regularly; make it a place where insects — these pests’ food supply — are not welcome.

“Most insects feed off of other insects, so an ongoing pest program reduces the food source, which reduces the entire population trying to invade your home,” Coons said.

Store clothing in plastic bins with tight-fitting lids. Use a vacuum to reach indoor spiders, immediately removing, securely tying up the vacuum bag, and placing it in the trash outside. Unless sprayed directly onto the spider, pesticides don’t work on the webs; spiders’ tiny feet can’t pick up pesticide residue.

After finding their webs, return after nightfall with a flashlight, thick gloves and boots. Spray directly with insecticide or squash with a stick or shoe.

Sticky traps along floorboards and in corners can catch unwanted insects. Schalau recommends using tongs and a jar to catch and release centipedes, as they are beneficial in the yard.

Exterminators can use stronger chemicals and get to hard-to-reach places. They are prohibited from spraying firewood. Keep your wood stacked away from the house and don’t store indoors.

Diatomaceous earth, a type of dried algae, causes dehydration in bugs and insects. Use a food-grade product and sprinkle around windowsills, doorways and baseboards.

Try planting lavender around the perimeter of the home. Place cedar chips around the outside foundation and in flowerbeds as a natural deterrent. Try a cat or chicken.