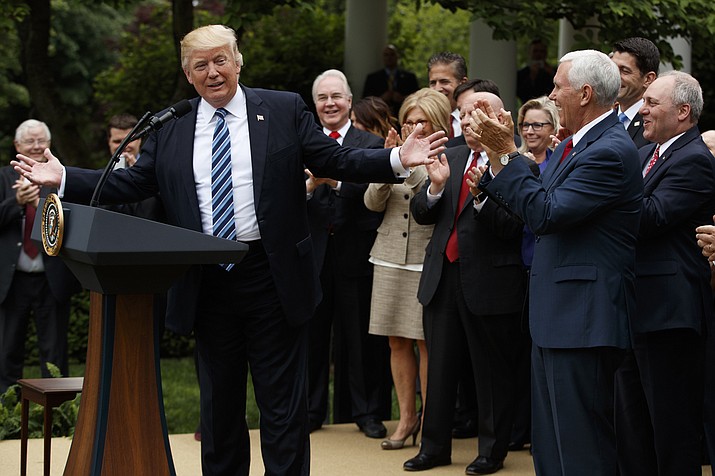 President Donald Trump, accompanied by GOP House members, speaks in the Rose Garden of the White House in Washington, Thursday, May 4, 2017, after the House pushed through a health care bill. (AP Photo/Evan Vucci)

A protest outside the office of U.S. Rep. Mike Coffman, R-Colo., over the health care overhaul bill Thursday, May 4, 2017, in Aurora, Colo. (AP Photo/David Zalubowski)

The 217-213 vote was a narrow victory, and ultimate success is far from assured since the measure must still make its way through a highly skeptical Senate.

WASHINGTON (AP) — Delivering at last, triumphant House Republicans voted Thursday to repeal and replace the “Obamacare” health plan they have reviled for so long, overcoming united Democratic opposition and their own deep divisions to hand a major win to President Donald Trump.

The 217-213 vote was a narrow victory, and ultimate success is far from assured since the measure must still make its way through a highly skeptical Senate. But after seven years of campaign promises and dozens of show votes, Republicans finally succeeded in passing a health care bill that has a chance of becoming law.

They weren’t waiting for final passage to celebrate.

“What a great group of people!” Trump exclaimed at the White House, arms raised to salute the dozens of lawmakers who hurried to join him in the Rose Garden immediately after the vote. Set aside for the moment were the feuds and philosophical divides that nearly sank the bill time and again. And at the same time, the Republicans had begun to show that perhaps they can come together and govern the country now that they control Washington in full.

Democrats countered that the GOP bill would have the opposite effect from what Trump predicted, pointing to estimates it will kick millions off the insurance roles while imperiling coverage for people with pre-existing conditions who had gained protections under Barack Obama’s Affordable Care Act. They also forecast that Republicans will pay a steep political price for passing legislation that’s polled poorly and takes concrete benefits away while offering only promises of more choices and lower costs.

The GOP health bill would eliminate the fines Obama’s law imposed on people who don’t buy coverage, and erase tax increases in the Affordable Care Act on higher-earning people and the health industry. It would cut the Medicaid program for low-income people and let states impose work requirements on Medicaid recipients. It would transform Obama’s subsidies for millions buying insurance, now based largely on their incomes, making the funding skimpier and tying it to consumers’ ages.

And states could get federal waivers freeing insurers from other Obama coverage requirements. With waivers, insurers could charge people with pre-existing illnesses far higher rates than healthy customers, boost prices for older people to whatever they wish, and ignore a mandate that they cover specified services like pregnancy care.

The bill would block federal payments to Planned Parenthood for a year, considered a triumph by many anti-abortion Republicans.

The Congressional Budget Office estimated in March that the GOP bill would end coverage for 24 million people over a decade. The House voted without a CBO estimate for the latest version of their bill.

Although it’s focused mostly on the minority of Americans who buy health coverage in the individual market, the GOP bill could also significantly impact the many who are covered by large e mployer plans. In one little-noted provision, employer plans could take advantage of state flexibility under the legislation to pick and choose which states’ rules to live by. That could allow them to impose annual and lifetime coverage limits, which are prohibited under Obamacare, and get rid of certain annual out-of-pocket spending caps.

Protesters were on hand again for Thursday’s vote, shouting “Shame on you! Shame on you!” and “2018! 2018!” as Republicans boarded buses outside the Capitol to head to the White House.

Yet as the 2016 election amply demonstrated, political outcomes can be difficult to predict. Republicans argued they would have had a still heavier price to pay if they failed to make good on an endlessly repeated pledge that helped them seize control of the House, the Senate and the White House in the years since the law passed.

Back in 2010, the Democrats held Congress and the White House and used their majorities to jam through an unpopular health care law on a partisan basis, just as Republicans have done now. 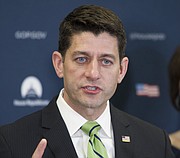 “They expect us to govern — if we’re going to be around,” Republican Rep. Dennis Ross of Florida said of voters.

The White House had pushed hard for a vote, and Trump got personally involved in last-minute maneuvering. He helped bring wavering moderates on board after a deal secured by conservatives last week scared them off by limiting protections for people with pre-existing conditions. The final change, agreed to just Wednesday at the White House, was to add $8 billion over five years to help people with pre-existing conditions, a sum critics called a relative pittance.

Indeed, despite assurances by GOP leaders that their legislation would rescue a failing health care system, it was opposed by nearly all medical and consumer groups, from the American Medical Association to AARP. The Chamber of Commerce supported the bill.

The health legislation passed the House on a banner day for Republicans on Capitol Hill, as the Senate gave final congressional approval to a bipartisan $1.1 trillion spending bill to keep the government running through September, and a House committee approved legislation that would gut the Democratic-authored Dodd-Frank law that regulated Wall Street after the 2008 financial crisis.