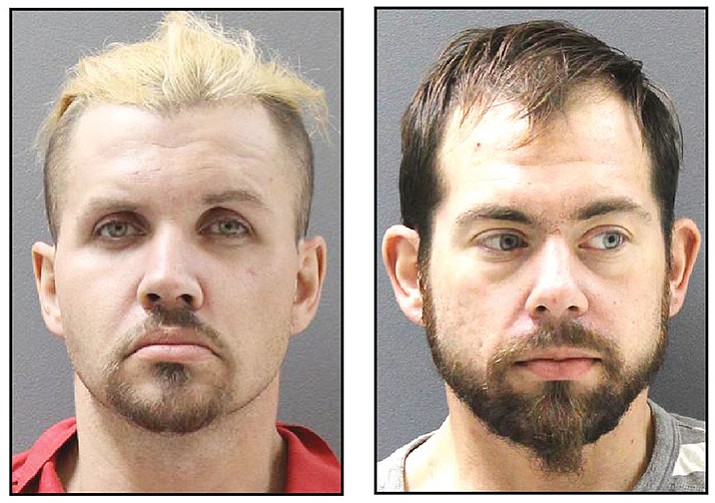 Two men are in custody and a third was seriously injured after a pursuit on Interstate 40 Monday morning, during which the driver is alleged to have fired shots while traveling over 100 mph.

It started at about 10:45 a.m., when a Yavapai County Sheriff’s deputy stopped a car on I-40 eastbound near Ash Fork for a moving violation.

The car pulled over to the side of the road, but as the deputy approached it, the driver sped away, said Dwight D’Evelyn, YCSO spokesman.

As the car began to accelerate, the front-seat passenger opened the door and tried to escape, but he became entangled in the door and was dragged.

The car stopped briefly, and the passenger was able to get free and roll onto the freeway shoulder, D’Evelyn said. The passenger was seriously injured and taken to a hospital.

The driver, John Freeman, 31, continued to head east on I-40 at high speed, firing a handgun out the passenger-side window, and striking a motor home in the driver’s side, D’Evelyn said.

As the car entered the Williams area, the engine, apparently unable to take the reported 100-to-120 mph speeds, began to billow white smoke.

At exit 165, Freeman got off the freeway and began to turn onto Highway 66, but then tried to jump out of the car, and also became entangled in the door. D’Evelyn said. Freeman was dragged as the car rolled down an embankment and hit a tree.

Freeman then got loose and ran into the woods.

His backseat passenger, Gideon Eads, 30, also got out and began to run.

While Freeman was crossing a wire fence near the crash site, he discharged his gun into the ground, D’Evelyn said, and, at one point, turned and shot at a deputy chasing him on foot.

Eads was caught shortly after the crash.

After an hours-long manhunt that included the deputies from the Coconino County Sheriff’s Office and troopers from the Department of Public Safety, Freeman was located and taken into custody.

The car had been stolen from Kingman and had fake license plates, D’Evelyn said, and a search of the car turned up glass pipe drug paraphernalia in the trunk.

D’Evelyn said Freeman admitted to knowing the car was stolen, said he had shot out the window of the car, and that the glass pipes were his, used for smoking methamphetamine.

He agreed to show deputies were he had hidden the gun, and it was recovered.

Freeman, who has a previous felony conviction from Oregon and a warrant on drug charges from Kingman, was booked on charges of aggravated assault on a peace officer; aggravated assault causing serious injury; drive-by shooting; discharging a firearm at a structure; several counts of endangerment; vehicle theft; fleeing a pursuing law enforcement vehicle, possession of drug paraphernalia and prohibited firearms possession.

He’s being held in the Camp Verde jail.

Eads, the backseat passenger, said he saw the passenger in the front try to bail out and get dragged, and saw Freeman shoot out the window and at the deputy. Eads claimed he was afraid for his life.

Eads was charged with one count of vehicle theft and is also in the Camp Verde jail.

The man who escaped the moving car was reportedly a hitchhiker and was not charged, D’Evelyn said.