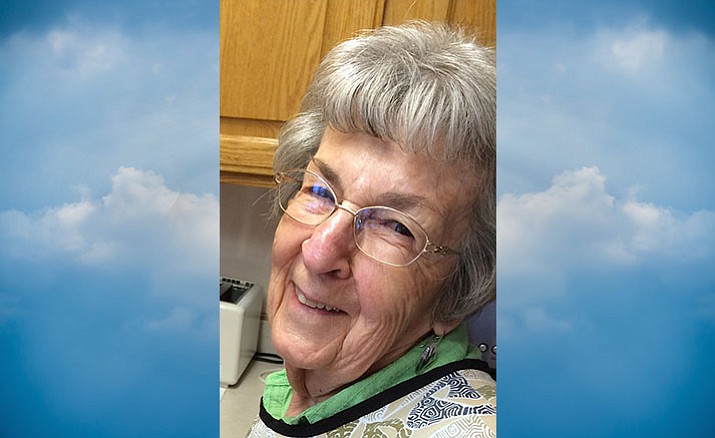 Lois Grace Shafer, longtime Prescott resident, passed into the arms of her Lord and Savior on March 14, 2017.

Lois was born on Aug. 29, 1930, in Pacific Grove, California, the oldest of two girls to Charles and Grace Burman. She grew up in California as her dad’s Sears & Roebuck career took the family to new locations.

In 1945, the family came to Arizona, first to Safford, then to Flagstaff. She graduated from Flagstaff High School in 1948 and went on to Arizona State College at Flagstaff (now NAU), where she met Walt Shafer. Walt’s family had recently arrived from Arkansas, and as Lois described it, “this handsome young man with the hot rod coupe could be heard rumbling into campus late for class.”

Lois graduated from Arizona State College in Tempe, (now ASU) in 1952. Following Walt’s Army service they married on Sept. 20, 1952, and began their life together in Mesa. In 1958, they brought the young family to Prescott where they bought into the ownership of Harmon Meat Packers for a few years. Prescott has been their home ever since.

Lois earned her teaching certificate from NAU and spent 24 years teaching second grade from 1969 until her retirement in 1993, at Washington Elementary and later Abia Judd Elementary. She was always gratified to see her former students years and decades later, and it filled her with joy to hear of their accomplishments. To her former students, who fondly remembered her, she was always “Mrs. Shafer.”

Throughout their life together Lois and Walt were “students of the world” and enjoyed traveling. They visited Europe, Mexico, Canada and 47 U.S. states, including Hawaii and Alaska.

Yet, Lois always loved returning home to Prescott. This was the only place she wanted to call home, often commenting on the joy of “seeing the mountains again” after a long trip.

Lois’ retirement also allowed her to volunteer. She enjoyed playing piano for the residents of Samaritan Village. For over 55 years Lois faithfully played piano for worship services at the First Church of God on Hillside, now Hillside Community Church of God on Ruth Street, playing up until a few months before she passed away.

She also taught Sunday School, and was actively involved in numerous church activities throughout her life.

To her many friends Lois was a sweet, kind, gentle soul.

To her husband Walt, Lois was a faithfully committed wife and best friend. To her children she was a hardworking and loving mother.

To her grandkids and great grandkids she was “Nana” and she loved to spoil them. For all of that, her family is deeply grateful and richly blessed and she is already greatly missed.

A memorial service for Lois will be held at Hillside Community Church of God, 937 Ruth Street, April 1, 2017 at 2 o’clock. In lieu of flowers, donations may be made to a charity of your choice. Please log on to www.ruffnerwakelin.com to sign Lois’s guestbook and share a memory with the family.