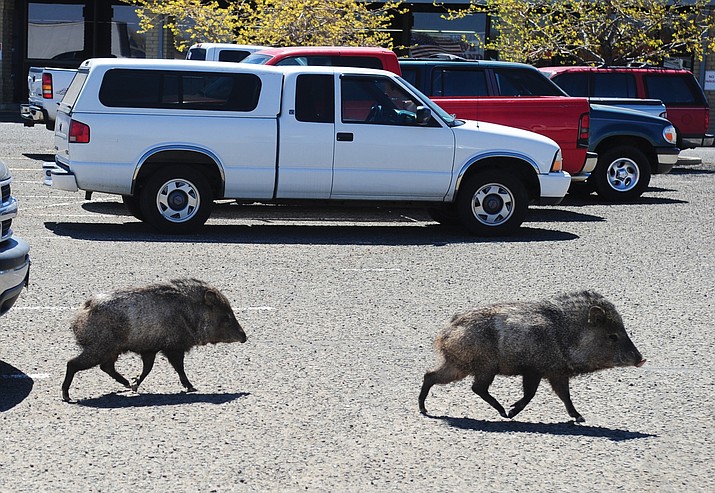 Arizona Game and Fish has authority in Prescott to cite people who are intentionally feeding wildlife — most prominently, the javelina. The javelina nuisance can usually be traced to a food source. “Almost without fail, if we have a residential problem with javelina, we can narrow it down to somebody in the area who is feeding them,” said Wildlife Manager Supervisor Darren Tucker. (Courier file photo)

Myths and facts about javelinas: No, they’re not pigs

A pair of javelina on the 11th fairway of Prescott Lakes Golf Course in 2016.

Darren Tucker sometimes gets calls from angry local residents: “You need to come and get your javelinas,” they say.

It doesn’t work that way, however, says Tucker, the wildlife manager supervisor for the Arizona Game and Fish Department’s Kingman region.

The complaints often come from residents who are frustrated with the damage that javelinas wreak in the yards, gardens, and mobile homes in the area.

In response to those callers, Tucker notes that the department does not have the resources to go out and physically deal with the javelinas that are roaming the washes, alleys, and forests of the Prescott area.

Secondly, he said, “It doesn’t work.” Removing the javelina from an area does not guarantee that the animals, or others like them, will not return.

What the department does have in Prescott is a new authority to cite people who are intentionally feeding the wildlife — most prominently, the javelina.

Tucker says the javelina nuisance can usually be traced to a food source. “Almost without fail, if we have a residential problem with javelina, we can narrow it down to somebody in the area who is feeding them,” he says.

In an attempt to control that, the Prescott City Council approved an ordinance in the spring of 2016 that makes it illegal to feed wildlife (with a few exceptions).

A major goal of the new law was to give Game and Fish the authority to seek out people who were intentionally putting out dogfood or table scraps to attract large wildlife such as javelinas or mountain lions.

Prior to that law, Tucker said, “For a long, long time, all we did was encourage people not to feed the wildlife.”

But that was not always effective. Prompting the City Council’s action was a report from a Copper Basin Road resident, who said a herd of javelina had attacked his wife when she was out walking their dog, seriously injuring the dog. The resident blamed his neighbor, who reportedly regularly put out open bags of dogfood to attract wildlife to the neighborhood.

Game and Fish officials attended a City Council meeting in May 2016 to voice support for the city ordinance, noting that the existing state law did not give them the authority to enforce no-feeding laws in the rural counties.

No wildlife-feeding citations so far

Still, Tucker says Game and Fish never intended to aggressively pursue violators. Rather, he said, the department always planned to approach the situation through education.

To that end, Tucker says Game and Fish has yet to issue a citation or a written warning on the new ordinance.

Rather, the department has given several verbal warnings, and has sent out four or five letters over the past year to people who they suspect of feeding the wildlife.

“For most people, that’s enough right there,” Tucker said. He added, however: “I’m not saying we won’t cite anybody. But at least for now, we do have the ordinance to fall back on.”

“We have not had any situations where that code was used,” Fuller said of the new wildlife-feeding ordinance.

That does not mean that the problem has gone away, however.

Fuller says the Prescott Police Department continues to get calls about javelina in various neighborhoods. Areas such as The Ranch, Haisley Homestead, and Piñon Oaks are regular problem areas.

But, Fuller said, that does not necessarily mean that someone is feeding the animals.

“The mere presence of (the javelinas) doesn’t tie into someone feeding them,” he said. “They love flower gardens, and they are going to find those.”

Chino Valley resident Doris Smith, for example, says javelinas have made short work of her flower gardens in the past. “The quickest way to attract javelinas is to plant bulbs,” she said. “They love them — irises, tulips. They eat them all.”

Tucker adds that javelinas also seem to be attracted to certain types of homes.

“One thing they love is mobile homes.” Especially during cold weather, he said. “If they can find a way into the skirting, they will. They do cause a problem.”

He suggests that people get rid of any potential food sources. “Anything that attracts them, remove it,” he said. Another possible deterrent: A low electric fence.

In addition, Tucker notes that there are private companies in the area that help residents deal with their javelina problems.

He stresses that Game and Fish must balance its wildlife mission with the wellbeing of the community. “We want the best for the wildlife,” Tucker said. “We also have to do what we can to ensure public safety.”