‘Into the Woods’ weaves fairytales into dramedy 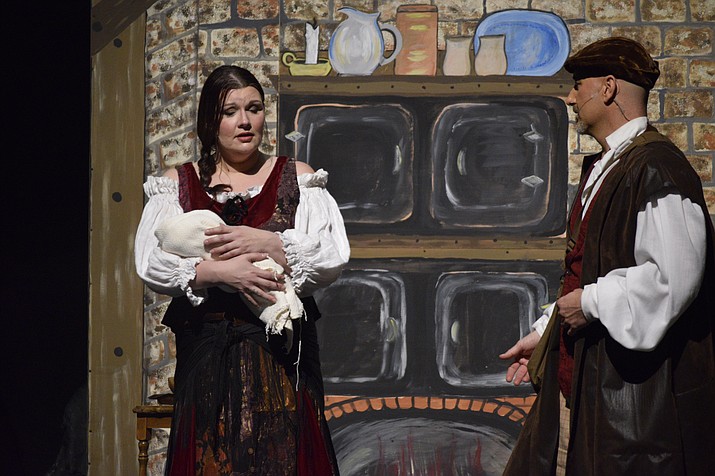 "Into the Woods" will be at Yavapai College Performing Arts Center starting Friday, March 24.

“Into the Woods,” the latest musical production at Yavapai College’s Performing Arts Center, may be more familiar to moviegoers as the 2014 all-star film adaptation, but it was on stage first.

In fact, it garnered three 1987 Tony awards (Best Score, Best Book, and Best Actress in a Musical) in a year dominated by musical powerhouse “The Phantom of the Opera.”

This is a dark comedy-drama, in which several of the Brothers Grimm fairytales collide in the same universe.

Despite the storybook theme, in this universe, “happily ever after,” is not the end of the story, and leads to unforeseen consequences for the characters in Act II.

“It’s a story of fractured fairytales,” director Nanette Hofer said. “These fairytale characters have to deal with reality.

“They have to band together to find a common solution,” she added.

Hofer said the magic comes to life on stage through lighting, sound and special effects.

The cast was drawn from both YC students and the community as a whole.

“It was heavy competition (during the auditions), because everybody in theater loves this piece,” she said. “The cast is extremely talented, and they’re so enthusiastic.

“They bring things to the stage that are so fresh.”

Most challenging was getting the technical aspects together in a relatively quick timeframe, she said.

The musical was written by Stephen Sondheim, whom Hofer calls “our musical theater genius.

“It’s just magic,” Hofer said. “I really believe this show is going to be visually stunning. And the story is timeless.”