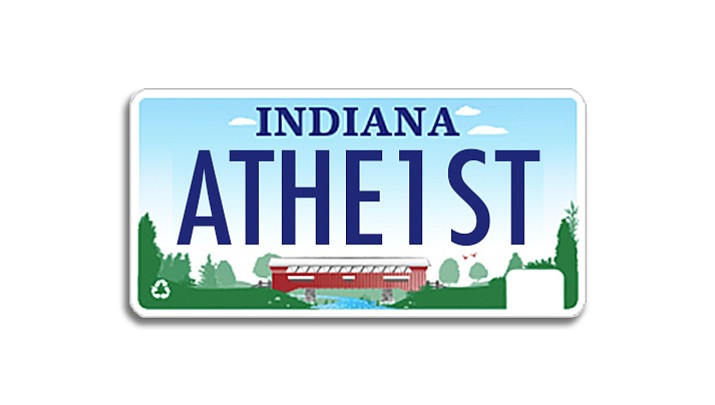 The Indiana Bureau of Motor Vehicles denied Chris Bontrager's first request for a personalized plate that reads, "ATHE1ST," without citing a specific reason.

ELKHART, Ind. (AP) — A man who was initially denied an Indiana license plate reading "ATHE1ST" now has the personalized plate.

The Indiana Bureau of Motor Vehicles denied Chris Bontrager's first request in February without citing a specific reason. The bureau's denial letter to Bontrager noted the agency could refuse a personalized plate if it had a connotation offensive to good taste or decency, was misleading or deemed improper.

Bontrager believed the decision was religiously motivated, and he filed an appeal with the state. He said the American Civil Liberties Union of Indiana helped the appeal process move quickly, without him having to testify before an appeals panel, The Elkhart Truth (http://bit.ly/2nS4DNZ ) reported.

"My intention was never to litigate this matter," said Bontrager, who lives in Goshen. "I just felt that the process should be more transparent."

The effort culminated in him receiving the new license plate on Monday.

The BMV issued a short statement on Bontrager's case, affirming the state's ability to deny any plate at will. The American Civil Liberties Union didn't respond to the newspaper's request for comment.

Both the Indiana Supreme Court and the U.S. Supreme Court have sided with the state's ability to decide whether a message on a personalized plate would be approved or denied, saying the messages amount to "government speech."