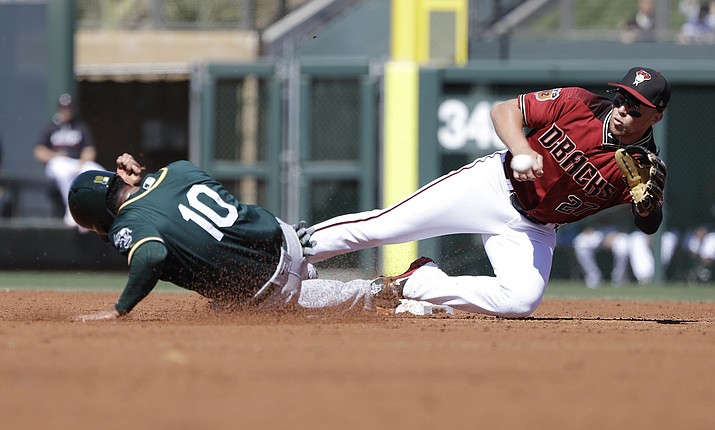 SCOTTSDALE, Ariz. — After a season on the go, Brandon Drury is happy to know he’ll primarily play second base this season for the Arizona Diamondbacks.

“It will be a piece of cake for him this year by just focusing on one position,” said teammate Chris Owings, who split time last year mostly between shortstop and center. “It’s nice when you can go out and just take groundballs at second base. You can work on being in a shift one day. You can work on double plays one day. If he can focus on that versus worrying about, ‘Am I playing left or right or second or third?’ then I think he’s going to have a great year.”

He knows his footwork will be a key to success at second.

“It is a position where you got to be athletic,” he said. “You got to be light on your feet. You got to turn double plays. You’re shifting all the time. There’s a lot of stuff going on. It’s not easy, but at the same time I’m working and studying so I can be the best I can be.”

Drury saw extensive outfield time last year because A.J. Pollock and David Peralta got hurt. Acquired from Atlanta before the 2013 season in the trade that sent Justin Upton to the Braves, Drury worked on flexibility and fielding posture in the offseason is getting tutoring during spring training from coach Tony Perezchica.

New manager Torey Lovullo says Drury might still be trying to judge when to backhand balls up the middle.

“The experience of dealing with that play will help him. I know he’s working very hard behind the scenes to make that play happen,” Lovullo said. “There are going to be mistakes that all our players make during the spring training. That’s what spring training is for. We’re not necessarily evaluating every piece of the game the way we would during the season. We just know there’s a process, and we like where he’s at.”

General manager Mike Hazen says Drury needs to work on the nuances of playing second — “especially now that we’re throwing some shifting on him.”

“But I think he’s done really well. He’s so attentive. He’s smart, and he works really hard. So, I think with all those ingredients, in time, he’ll be just fine,” Hazen said. “He has a really good bat that’s going to be a big part of our lineup.”