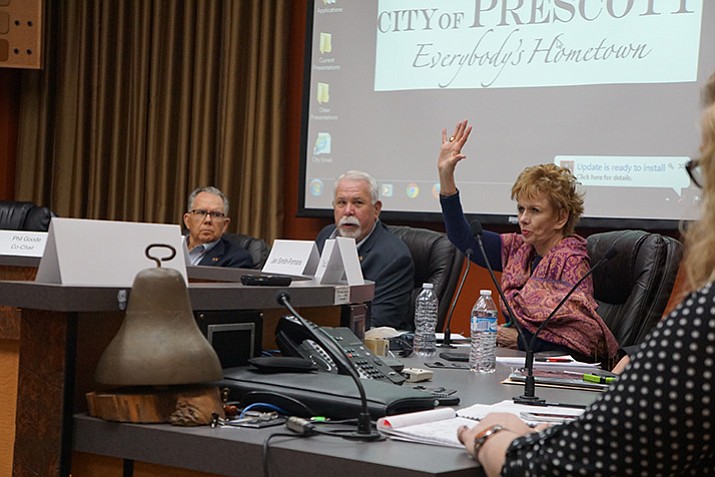 Jeri Smith-Fornara, a member of the Mayor’s Ad Hoc Committee on Structured Sober Living Homes, affirms she is concerned inspections have yet to be conducted.

That was the sometimes-heated debate that played out during a meeting of the Mayor’s Ad Hoc Committee on Structured Sober Living Homes Wednesday evening.

Throughout much of 2016, the Prescott City Council discussed how best to handle the reported proliferation of group recovery homes in the community.

After the Arizona Legislature gave local governments more authority to regulate the homes effective August 2016, the City Council approved a number of new restrictions, including a registration requirement.

Meanwhile, the citizen ad hoc committee – after conducting a series of monthly meetings throughout much of 2016 – took a several-month hiatus beginning this past fall to allow the new rules to take effect.

In their first meeting back this week, committee members were looking for progress.

City officials led off the discussion by reporting that the number of group homes in Prescott has dropped noticeably from past estimates, which once were as high as 160 to 200, and more recently stood at about 100.

City Tax and Licensing Supervisor Lars Johnson told the committee that since the Jan. 1 implementation of a new registration requirement for group homes, 21 homes have applied, while another 25 are in the process of applying.

Johnson added that 15 of the original list have indicated that they are closing their doors, and another 19 say they are being licensed through the State of Arizona, which exempts them from the city’s registration requirement.

That left about 20 homes that have yet to comply, and will require follow-up actions, Johnson said, noting that the deadline for registering with the city was March 1.

That information raised questions from the committee members about the 19 homes that are now registered with the Arizona Department of Health Services, and are therefore not subject to the city’s ordinance.

Maintaining that the state’s requirements are more stringent than the city’s, Prescott City Attorney Jon Paladini responded, “Not in the slightest.”

The state requires Department of Health Services licensing for inpatient homes with a behavioral health focus. Paladini pointed out that one of the DHS requirements is that homes must have trained and certified behavioral health aides on staff 24 hours/seven days a week. On the other hand, the city’s new ordinance requires sober-living-home house managers to get less stringent training, Paladini said, and has no requirement for certification.

“Generally speaking, DHS restrictions are much more strict than ours are,” Paladini said. “I call that a win.”

Committee members also had questions for Chief Code Enforcement Officer Michael Fleming, who reported that although the city has been working to set up the newly required health/safety inspections of the registered group homes, none of the inspections have yet taken place.

“You have 21 homes that have completed applications, but you haven’t scheduled any inspection yet?” asked Committee Member Phil Goode. “Why not?”

Once the process is worked out, Worley said, “We should be able to do at least one a day, if not more.”

The ad hoc committee plans to meet again on April 12, and Goode said, “I look forward to your follow-up report.”

Meanwhile, the industry also appears to be watching the level of city enforcement of the new regulations.

Molly McGinn of TreeHouse Learning Community, which conducts training for the house managers, told the committee that 57 managers successfully completed the training in September, October and November 2016.

Subsequent training sessions have attracted few students, however, McGinn said, adding, “People are waiting to see if there will be enforcement.”

Johnson reported Thursday afternoon that a new round of letters were mailed to the 20 non-complying homes earlier that day. If the homes do not respond, he said the city code enforcement department would go out to determine if they are still in business.

Likewise, he said, the city is verifying the status of the 15 homes that indicated they are closing their doors.

Depending on the status of the 20 non-responding homes, Paladini estimated that the city currently has 60 to 80 of the homes, adding, “It’s actually becoming a really manageable number.”