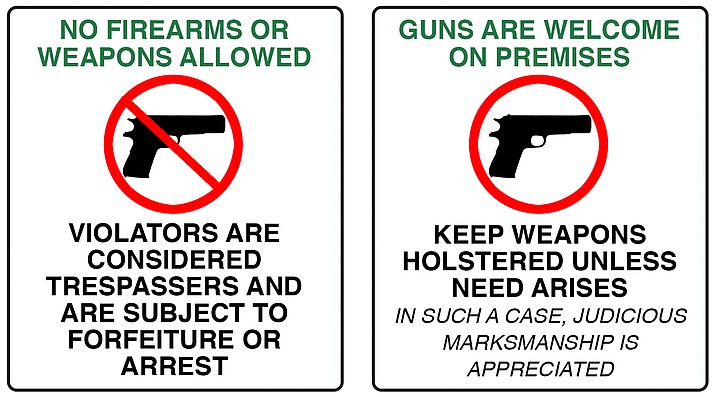 SB1159 would spell out that someone injured by another person with a firearm cannot sue a business that allows weapons inside unless there is a proof the business owner “intends to cause injury or acts with gross negligence.’

PHOENIX — State legislators are altering state laws to encourage business owners to welcome customers with guns by giving them special protections from lawsuits if something goes wrong and someone gets shot.

Legislation approved Wednesday evening by the House Judiciary Committee would spell out that someone injured by another person with a firearm cannot sue a business that allows weapons inside unless there is a proof the business owner “intends to cause injury or acts with gross negligence.’’ But if there is a “no guns’’ sign at the door, the business can be held liable for simple negligence.

Dave Kopp, lobbyist for the Arizona Citizens Defense League said the disparate treatment is justified because business owners are treating their customers different. And he contended that in telling their customers they cannot bring in their own guns businesses are accepting some responsibility for their safety.

Sen. Sonny Borrelli, R-Lake Havasu City, the sponsor of SB1159, had his own justification for the difference.

But activist Alan Korwin said the real goal is to end the “reckless” policies of businesses that deny customers their Second Amendment rights.

“This bill is about discrimination,” he told members of the House Judiciary Committee.

“It’s about whether or not you can post the sign to say, ‘You’re not welcome here, we don’t want your kind,’” Korwin continued. “It’s about civil rights denial. And it goes on statewide.”

Rep. Maria Syms, R-Paradise Valley, said that ignores the other side of the issue.

“I think a business owner should be able to decide whether or not they want guns in their establishment,” she said. And Syms, who sided with Democrats in voting against the measure, said business owners who exercise that right should be entitled to the same legal protections from lawsuits as others who permit customers to keep their guns.

But Rep. David Stringer, R-Prescott, said he sees the issue through a different lens.

He said SB1159 leaves intact the current liability of business owners who want to post signs asking patrons to keep guns out. All it does, said Stringer, is give a new legal shield to those who are OK with customers who are armed.

Central to the debate is who gets sued if someone is in a business when a shooting occurs and someone is injured.

Kopp said the primary liability starts with the person who fired the weapon. What remains is the question of whether that liability is shared by a business owner who was negligent in allowing the incident to occur in the first place.

Under this bill, if the owner lets customers carry their own firearms, that liability for mere negligence disappears. Kopp said that makes sense.

“One is recognizing the rights of their customers to defend themselves and the other they’re not,’’ explained Kopp.

“When they post that sign they’re creating a duty to their customers,” he continued. “They’re saying, ‘You can’t come in here and defend yourself so I have to do it for you.’”

But Rep. Kirsten Engle, D-Tucson, said the dual-liability standard is it’s based solely on the presence or absence of a sign — and not what actually occurred in a given incident. She said that proves the true intent of the legislation.

“It seems like the purpose of this is to punish businesses that post a gun-free zone,” Engle said. “But that is completely their right to do.”

Korwin, in his own testimony, made no secret that his support for the legislation is based on dissuading business owners from posting those “no guns” signs.

“It’s offensive, it’s an affront,” said Korwin who is the author of several books on gun rights.

“Putting up that sign is known to be dangerous, negligent and reckless,” he continued. “Shootings happen in these make-believe gun-free zones when individuals put up signs that say, ‘We don’t want your kind in here, we don’t believe in your Second Amendment rights.’”

Rep. Daniel Hernandez, D-Tucson, bristled at the suggestions that the signs somehow amount to discrimination.

“I think it’s offensive,” said Hernandez of the idea of disparate legal burdens placed on gun victims who file lawsuits based on the presence or absence of a sign where they were injured. “It’s difficult to understand why we would hold people to two different standards and say, ‘It’s OK to be negligent, just don’t be grossly negligent.’”

“I think it’s good public policy to hold people responsible for the decisions that they make,” he said, saying that includes depriving a customer of the right of self-defense.

The measure, which squeaked out of the Senate last month on a 16-14 vote now needs approval of the full House.