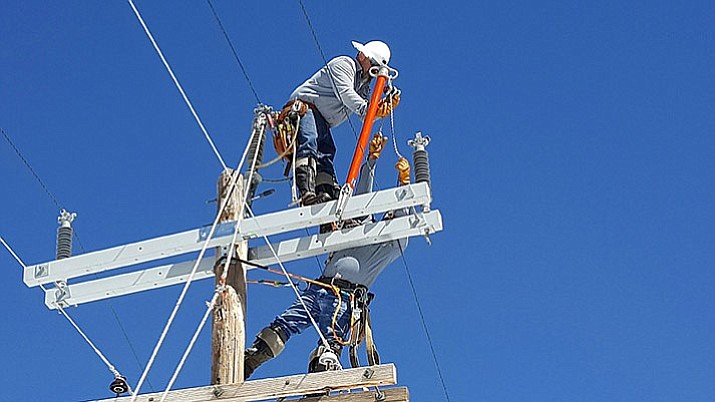 Arizona Public Service customers in Yavapai County have been experiencing some significant power outages since the region was hit with a stronger-than-expected storm earlier this week.

“It was a heavier storm than I think a lot of people anticipated,” said APS spokesperson Annie DeGraw. “We got 18 to 24 inches in a lot of areas.”

A couple of the impacted areas were southern Prescott and neighboring Walker. Early Tuesday morning, Feb. 28, a slew of APS customers in those areas lost power due to downed power lines. As of Thursday afternoon, March 2, 828 of those customers were still without power, according to APS.

About a day after the outage started, emergency responders notified many of the affected APS customers by email that the outages might last for an extended period of time.

Walker Fire Department, for instance, reached out to residents with recommendations on how to take the necessary precautions during a lengthy power outage, such as ensuring that water pipes don’t freeze and burst and that refrigerator and freezer items are taken into consideration.

DeGraw said the repairs were taking longer than usual for two reasons.

“Winter storms specifically tend to hide damage more than a traditional monsoon would,” DeGraw said. “Plus the fact that a lot of these areas are isolated as far as where the poles’ locations are and that’s exacerbated by extreme weather conditions.”

She explained that many of the poles being repaired or replaced can usually be accessed using bucket trucks during the summer, but winter conditions are another matter.

“The only way to get to them is by snowcat or by foot, so our crews, which have been out 24 hours a day since the snow hit, are having to hike in with all of their gear, climb the poles since they don’t have the bucket trucks, and then get everything into place,” DeGraw said.

Additionally, the poles are located in areas where the ground is essentially solid rock, DeGraw said.

“And since it’s snow, they have to hand dig it with jackhammers to get the poles out and to put new ones in,” DeGraw said.

Though estimated times for power restoration often shift, APS said Thursday afternoon that they expect to have the lost power in Prescott and Walker back online by 8 p.m. that evening.

However, Marcie Slay, Yavapai County Emergency Management spokesperson, said Walker Road will be closed from Hassayampa Lake to Potato Patch Friday, March 3, as APS crews work on damaged power poles. The road may be closed throughout the weekend, Slay said.

For additional information on locations and estimated time of restoration of power, visit APS’s Outage Map at www.outagemap.aps.com/outageviewer/.