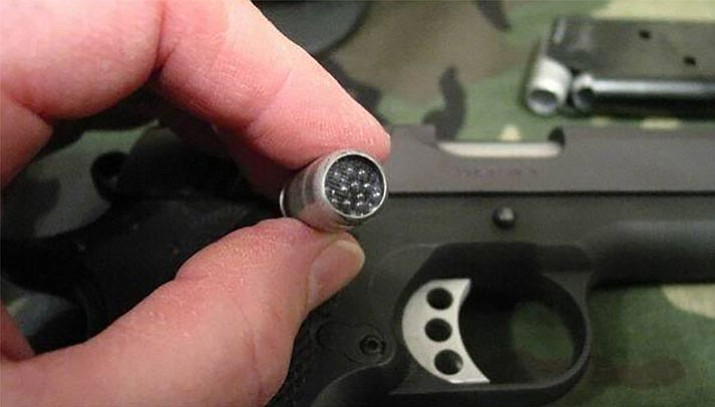 A bill in the state House will allow residents to use snake shot in cities for self-defense against small animals or snakes.

HB2022 approved by the Senate Government Committee spells out that people can use a special kind of small-caliber shot, one designed to kill snakes and small mammals at close range. Sen. John Kavanagh, R-Fountain Hills, said it provides residents with an option for self-defense or at least a method of pest control.

But the more far-reaching measure the same committee approved on the same 4-3 party-line vote would remove the chance that someone could be prosecuted for being criminally negligent in shooting off a weapon in city limits. Instead, under HB2287 prosecutors would have to prove that someone “intentionally, knowingly or recklessly” fired a gun.

Both would amend “Shannon’s Law” adopted in 2000 in the wake of the death of 14-year-old Shannon Smith.

The Phoenix teen died when she was hit by a bullet that had been fired in the air from some distance away. No one was ever arrested.

That law not only makes it a felony to fire off a gun within a mile of any occupied structure within city limits but also makes it illegal to act with criminal negligence. That is defined in Arizona law as acting in a way “that the failure to perceive (the risk) constitutes a gross deviation from the standard of care that a reasonable person would observe in the situation.’’

Rep. Tony Rivero, R-Peoria, who crafted the measure, said that wording allows someone to be prosecuted for “accidental” discharge of firearms.

“Accidents are a fact of life,” he told committee members.

Dave Kopp, lobbyist for the Arizona Citizens Defense League, cited a 2012 incident where someone — he did not provide a full name — purchased a gun, brought it back to his apartment, and then tried to remove a round stuck in the chamber. The gun went off and fired the round into the floor.

No one was hurt. But Kopp said the person was charged under this with a felony.

“Probably not the smartest thing in the world to do,’’ Kopp conceded of what the person was doing. “But we don’t want to see innocent people convicted of felony stupid.”

But Sen. Juan Mendez, D-Tempe, said Kopp’s example is exactly why the law should not be changed to legalize the criminal negligent discharge of firearms.

“Playing with a gun in an apartment knowing it was loaded?’’ Mendez said. “I don’t know how that’s supposed to convince me.’’

“It was a stupid thing to do,’’ Kopp responded. “It wasn’t a criminal thing to do. And nobody’s was hurt.’’

“Nobody was hurt — that time,’’ shot back Sen. Lupe Contreras, D-Avondale.

“He knew there was one stuck in the chamber,’’ Contreras continued. “He doesn’t know if it does fire if it’s going to hit somebody or not.’’

The legislation brought out Edith Smith, who was Shannon’s aunt, in a bid to quash the proposal. She said since the law was adopted the amount of random gunfire has dropped.

“So why change something that works?’’ Smith said. “Shannon’s Law has made the Valley and other urban areas in Arizona safer.’’

Kopp, however, said even if the law is amended it will still protect people from celebratory gunfire. He said people act knowingly or recklessly when they fire a gun into the air.

Mendez, however, said changing the law would give people who fire off weapons a way of escaping criminal charges by saying the gunfire was just an accident.

The measure on “snake shot’’ is being pushed by Rep. Jay Lawrence, R-Scottsdale.

He said the ammunition is not dangerous at least not to people, consisting of lead pellets “the size of most grains of sand,’’ loaded into a .22-caliber shell. And Lawrence said even small animals and snakes are probably in no danger unless the person firing the gun is within at least 14 feet.

Opponents, however, found several things to fire at in the measure.

On a surface level, Rhishja Cota Larson testified that neighbors hearing gunfire are not going to know what kind of ammunition is being fired off. The result, she said, will be calls to police to investigate.