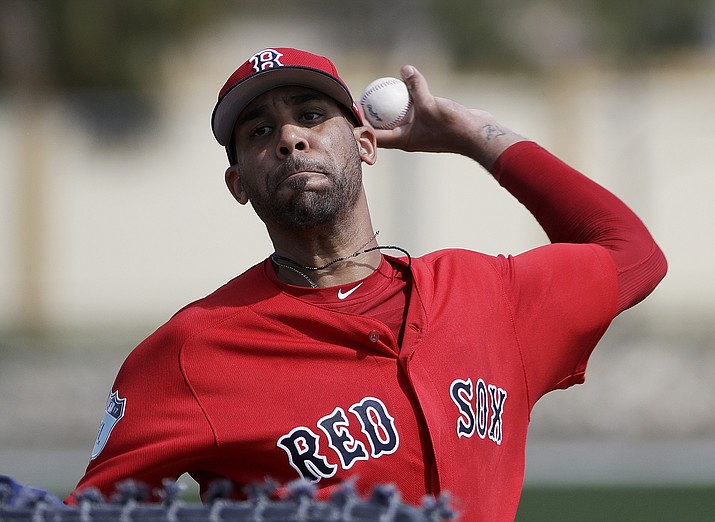 Boston Red Sox left-hander David Price was scratched from his first spring training start and will consult with specialists after experiencing soreness in his left elbow and forearm.

Price, who had been scheduled to make his first spring training start this weekend, had an MRI on Wednesday and is expected to seek second opinions from Drs. James Andrews and Neil ElAttrache.

“He’s gone through some soreness in the forearm/elbow area in previous spring trainings but this one has got a little bit more intensity to it,” Farrell said.

The loss of Price for a significant amount of time could be a setback for the Red Sox. The team was counting on Price, along with reigning Cy Young Award winner Rick Porcello and lefty Chris Sale, acquired in a December trade with the White Sox for four top prospects, to lead the team this season.

Price went 17-9 with a 3.99 ERA in a major league-leading 35 starts last season, his first after signing a $210 million, seven-year contract with the Red Sox.

Jabari Blash hit his third homer in three days, a three-run blast in the eighth to highlight the Padres’ rally.

Padres starter Christian Friedrich gave up five runs — four earned — on three hits and a walk over two innings. Travis Janikowski picked up a pair of hits and Hunter Renfroe drove in a run with a single.

Dansby Swanson, the top pick in the 2015 amateur draft, led off the game with a solo homer and Adam Walker — who has hit 58 homers the past two seasons in the upper minors — added a two-run drive, both off Adam Wainright.

Cardinals prospect Paul DeJong had a three-run homer and a triple, and Matt Adams went 2 for 2 with a solo homer.

Pittsburgh’s Jordy Mercer hit a grand slam in a seven-run third inning, and Francisco Cervelli and Jose Osuna both homered off Justin Verlander, who gave up three runs, three hits and two walks over two innings.

Justin Upton hit a solo shot for the Tigers.

Jorge Polanco had a solo home run and a three-run double and starter Phil Hughes allowed one earned run on three hits and two walks over two innings.

Baltimore All-Star third baseman Manny Machado, playing shortstop while J.J. Hardy nurses a sore back, went 2 for 3 with an RBI double and starter Kevin Gausmann gave up a run in two innings. Prospect Ryan Mountcastle hit a two-run homer in the ninth, prompting the extra inning.

Jose Bautista went 2 for 2 with a three-run home run and starter J.A. Happ gave up one hit in two shutout innings with two strikeouts.

Chicago got three of its four hits and both runs off Luis Castillo in the seventh.

Cubs starter Rob Zastryzny gave up two earned runs on three hits over 2 2/3 innings and was lifted after taking a liner off his shin.

Cleveland starter Danny Salazar gave up one earned run on a hit and three walks over two innings and said afterward, “We have the best rotation right now. That’s the way I feel.”

Shawn Morimando, who hopes to get a job in the bullpen, gave up five hits and three runs in 1 2/3 innings.

Giants starter Matt Moore was roughed up for four earned runs on five hits and two walks over 2 2/3 innings. Nick Hundley had two hits. The Giants had six of the 10 errors in the game.

After a shaky outing, Colorado starter Tyler Anderson struck out three in two perfect innings of work and Carlos Gonzalez went 2 for 3.

Marcus Semien had a run-scoring double and Ryon Healy drove in two on a pair of sacrifice flies. Oakland starter Jesse Hahn struck out three in three shutout innings.

Carlos Ruiz went 2 for 2 with an RBI, Ben Gamel drove in a run with a double and Guillermo Heredia drove in two with a pinch hit double. Heredita is 7 of 12 with six doubles and a triple this spring. Mariners lefty starter Ariel Miranda allowed one earned run on three hits and a walk over three innings.

Milwaukee starter Matt Garza tossed a scoreless inning but Jorge Lopez got roughed up for four runs on three hits in 1 1/3 innings.

Luis Valbuena had two doubles with two RBIs and C.J. Cron added a pair of hits for Los Angeles. Starter Ricky Nolasco gave up a run on two hits, striking out three, over two innings.

Greg Bird hit his third home run of the spring and Matt Holliday went opposite field for his first since signing with New York. Aroldis Chapman struck out two in a perfect inning and hit 100 mph on the radar gun with his second pitch of spring training.