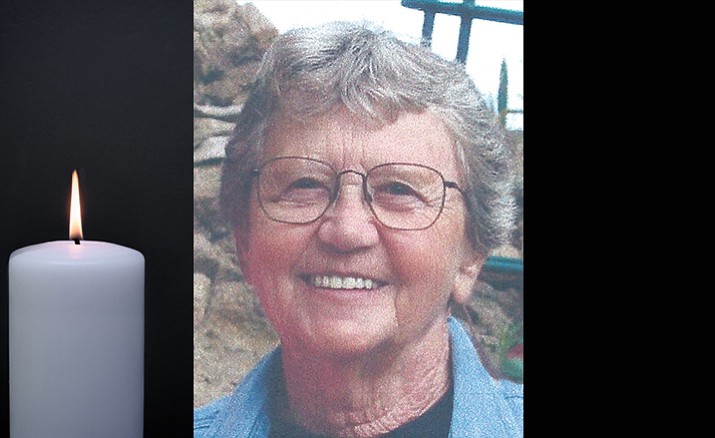 Dona Jean Erickson was born July 10, 1927, in Hagerstown, Indiana. She left us June 21, 2017, back in her adopted home of Prescott, three weeks before her 90th birthday. She was the only child of Williams Arthur Carpenter and Helen Carpenter (Rhodes).

She entered the Nurse Cadet Corp in 1945 and began her training at Methodist Hospital in Indianapolis. After graduation in 1948, she was planning on going to graduate school in Berkeley. On a cross country trip before school she stopped to visit a friend who was working at Fort Whipple VA Hospital. She fell in love with Prescott, got a job at the VA as a surgical nurse and made the “cute little cowboy town” her home for the next 50 years.

After leaving the VA, she became the School nurse for all 19 rural county schools. She loved traveling the county in the Model A. In 1953, she married Rod Erickson. They had one son, John Erickson. After John was born, she became the school nurse for Washington School and Prescott Junior High School, where she worked until 1974, when she left nursing to pursue her passion of painting. She became well known for her portraits and Arizona landscapes. She followed this dream until her health prohibited her painting any longer.

She was president of Prescott Business and Professional Women and Prescott’s Woman of the Year in 1964. She was active in the Smoki Ceremonials for many years and was Chieftess in 1964. She co-founded the Prescott Archaeological Society.

She is survived by her friend and companion of 30 years, Jan Hermann; her son, John Erickson of Prescott, and loving daughter-in-law Diana; stepgrandson Sean DeWitt and his wife Millie; and two great-grandchildren Lulu and Maddy (Prescott Valley). She was preceded by her mother, Helen Lee (Rhodes), and stepfather Arthur Lee of Prescott.

There will be a celebration of life Thursday, June 29, at 11 a.m. at Ruffner-Wakelin Funeral Home, followed by light refreshments at the Carriage House.

The family would like to thank Yavapai Regional Medical Center and the Marley House for their care and concern during Dona’s final days.