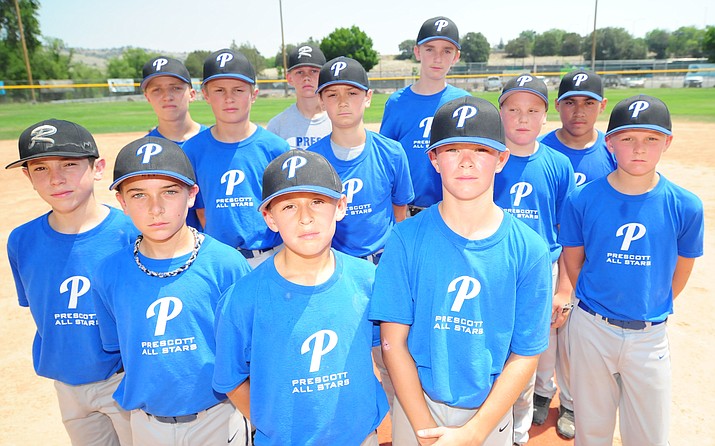 With a bid for the state playoffs up for grabs, the District 10 Little League Majors All-Stars Tournament is set to get underway at Bill Vallely Field in Prescott on Wednesday night.

All-Star clubs from Prescott Valley, Chino Valley, Wickenburg, Camp Verde and Verde Valley are all scheduled to be in uniform for opening night, with Williams getting a first-round bye, but for the Prescott All-Stars, who are hosting the week-long event, home field advantage may certainly factor into how the tournament eventually plays out.

For now, however, Prescott skipper Dan Streeter and his club are focused on “us,” he said.

“We know that District 10 is always a challenging district with a lot of talented teams. For us, we are focused on us and taking us to the next level,” Streeter said. “If we put in the work, it will take care of itself, we are much more focused on the product.”

Led by 12-year-old Scooter Schwartz, Prescott features a lineup filled with bats that will be tough to silence for any opposing pitching staff.

“We have a lot of kids that can contribute,” Streeter said, adding players like Lukas Barrett, Luke Carmick, Jake Hilton, Oscar Munoz and the rest of his 14-man roster make up a well-balanced club.

Prescott is scheduled to open the tournament with traditional powerhouse Verde Valley on Wednesday night, but that doesn’t faze Streeter and his ball club.

“We know that District 10 has traditionally run through Verde Valley. So it benefits us playing them first out of the gates,” Streeter said. “We go in with our pitching intact. We’ll see an elite-level arm from them, and they’ll see it from us.”

Streeter said he was “undecided” on starter for Wednesday night’s contest.

For the Prescott Valley All-Stars, skipper Bear Suksi said he has a “pretty good team” but it will “take a little bit of luck here and there” to get his club to state.

“We’re expecting some tough competition out there,” Suksi said, adding his club “hangs their hat” on pitching and defense. Wes Collier, 12, is the No. 1 pitcher for Prescott Valley, while Thomas McLaughlin, 12, Grady Rose, 12, and 11-year-old Carson Feddema follow.

Suksi, who is in his third year with this All-Star group out of Prescott Valley, said it will be important to keep the ball down in the zone if they are to be successful.

“We [can’t] leave the ball up and get hit hard,” Suksi said.

Prescott Valley is scheduled to open the tournament Wednesday night against the Chino Valley All-Stars.

Brian M. Bergner Jr. is associate sports editor and a columnist for The Daily Courier. Follow him on Twitter, Instagram, Periscope and SoundCloud at @SportsWriter52, or on Facebook at @SportsAboveTheFold. Reach him at bbergner@prescottaz.com or 928-445-3333, ext. 1106.