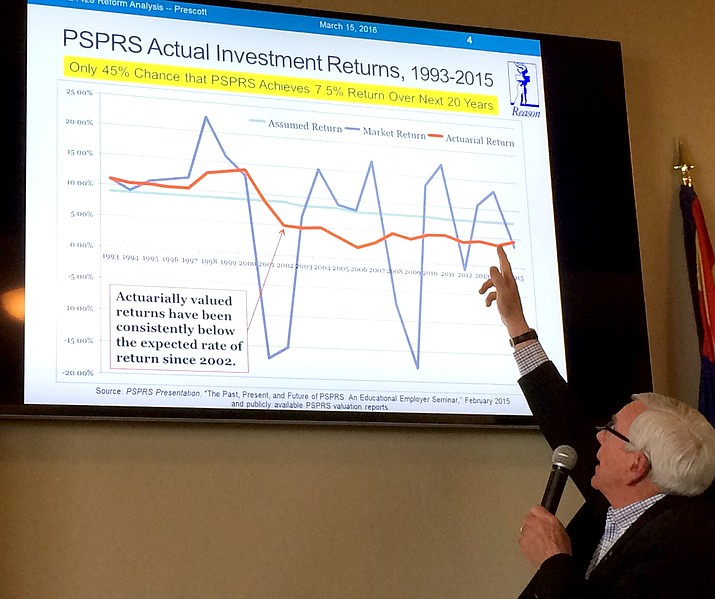 A budget option that would allow the city to make a large lump-sum payment to the Public Safety Personnel Retirement System (PSPRS) will be under consideration by the Prescott City Council this week.

The council will conduct four meetings on Tuesday, June 27, starting with a 10 a.m. closed-door executive session, and continuing with a 1 p.m. study session, a 3 p.m. voting meeting, and 3:01 p.m. special meeting for adoption of the 2018 fiscal-year budget.

A memo for the council explains that the council will have two options when considering the final budget: approving it as presented on June 15; and moving $11 million from the public works capital fund to the general fund contingency.

The contingency would allow for “general fund reserves to be used, if the council wishes to make a lump sum payment to PSPRS,” the memo stated.

At the June 15 adoption of the tentative 2018 budget, the council debated whether to use a portion of its $15.6 million reserve fund to help pay down the city’s $78 million unfunded liability with the PSPRS.

Some council members pushed for putting as much as $10 million of the reserve fund toward the unfunded liability, while others cautioned against leaving the city short on reserves — especially if the 0.75-percent sales tax increase proposal aimed at paying down the PSPRS shortfall fails with voters on Aug. 29.

In other action (at the 1 p.m. study session), the council will:

The memo notes that while the employee-related policy is administrative (by city staff), the former is a council policy that can be altered by a vote of the council.

“This is a general discussion and study of the council policy that prohibits the public from entering city-owned buildings and facilities with a deadly weapon,” the memo explained.

Among the targeted eligible projects would be: retention or expansion of businesses with high-wage, knowledge-based jobs and/or significant capital investment and new wealth in the community; projects that create or attract a top-tier workforce; projects that provide infrastructure improvements and other public benefits; projects that nurture and grow targeted startup businesses; and projects that redevelop vacant or under-utilized commercial and industrial properties.

• Hear a presentation on the Buxton Consumer Spending Report, for which the council approved a $48,000 expenditure in December 2016.

• Hear a report on the security-alarm ordinance that the council approved in August 2013, which was meant to reduce false alarms and their impacts. A city memo notes that the discussion would include discussion of the alarm ordinance and its effects.