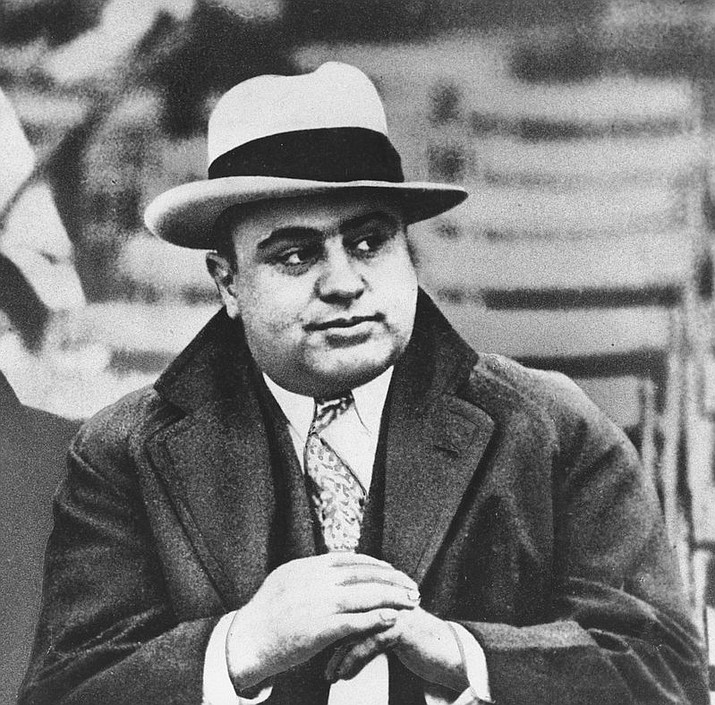 In this Jan. 19, 1931 photograph, Chicago mobster Al Capone is seen at a football game in Chicago. Artifacts connected to some of the nation’s most notorious gangsters are being auctioned this weekend. (AP Photo/File)

BOSTON (AP) — Artifacts connected to some of the nation’s most notorious gangsters sold for more than $100,000 at auction Saturday.

A diamond pocket watch produced in Chicago in the 1920s and a musical composition that belonged to Al Capone were among the items that sold at the “Gangsters, Outlaws and Lawmen” auction. The watch fetched the most — $84,375 — according to Boston-based RR Auction.

The winning bidder of the watch was not identified. The buyer is a collector who has an eye for interesting American artifacts, said RR Auction Executive Vice President Bobby Livingston. He was among about 30 internet, telephone and in-person bidders.

A musical piece entitled “Humoresque” sold for $18,750. Capone wrote down the music and lyrics from the piece — originally composed by Antonin Dvorak and written by Howard Johnson — while he was in Alcatraz in the 1930s. It contains the lines: “You thrill and fill this heart of mine, with gladness like a soothing symphony, over the air, you gently float, and in my soul, you strike a note.”

Livingston told The Associated Press he wasn’t surprised that the piece sold because of the way Capone “resonates in the American imagination.”

“The musical artifact gives insight into who this man was,” Livingston said. “It humanizes him.”

Several items from infamous couple Bonnie and Clyde were big hits at the auction. An autographed “So Long” letter written by Bonnie Parker and signed by Clyde Barrow just before their deaths sold for $16,250. A pair of Texas arrest warrants fetched $8,125.

Parker’s silver-plated, three-headed snake ring fetched $25,000. The ring was not made by Barrow — a skilled amateur craftsman who engaged in jewelry making, woodworking and leathercraft behind bars — as originally believed, according to RR Auction’s website.

“I asked Buddy Barrow what his uncle would be thinking about the auction, he felt that Clyde would have said ‘make as much money as you can,’” Livingston said.

A letter written by John Gotti, the reputed head of the Gambino crime family in New York, didn’t sell. The 1998 letter to the daughter of a mob associate urges the recipient to tell her father “to keep the martinis cold.”